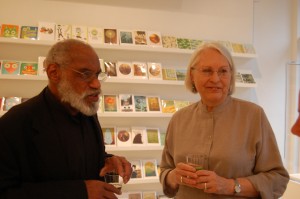 Renowned artist Leo Dillon died May 26, reportedly suffering from a tumor on a collapsed lung. Dillon was 79. He is survived by his wife and collaborator, Diane.

They won the Best Professional Artist Hugo in 1971 and their work was celebrated in a memorable exhibit at L.A.Con I (1972).

Among many tributes paid to them during their careers, the Dillons received two Caldecott Medals (1976, 1977), were named to the Society of Illustrators Hall of Fame (1997) and were recognized with a World Fantasy life achievement award (2008).

The Dillons proudly identified themselves as illustrators, and Leo told a Scholastic interviewer, “We love illustrating and I suppose we can say we love everything about it. It’s very difficult; it causes us immense pain (sometimes), but like all things that cause pain if it’s worth doing, the outcome will be very pleasurable.”

Within the science fiction field the Dillons were made famous by their Ace Book covers and their work with Harlan Ellison.

They first met Ellison in 1959 while he was editing Rogue. Their illustrations for Ellison’s Dangerous Visions (1967) led to a meeting with Terry Carr, editor of the Ace Specials, who recruited them as cover artists.

Leo revealed in an interview for Locus how the two artists’ relationship with Ellison was as much adventure as creative collaboration:

Leo: …Harlan Ellison edited Dangerous Visions – and I don’t know if too many people know about this, but there were not supposed to be illustrations in that book. Harlan, with the power of only Harlan, said ‘I want illustrations.’ And the publisher said, ‘Okay, if you can do it over the weekend, you can have it. We’re going to press on Monday, and if you don’t have any drawings, that’s it.’ They thought they had him. [laughs]. So Harlan called us and said, ‘There’s this impossible task. I want each story illustrated. We’ve only got two days to do it.’ That’s Harlan. We had gone down some very odd roads with him already. [laughs] So we said, ‘Well, yeah, we can try. Come on over.”’

So Ellison came over — bringing Terry and Carol Carr with him, and that introduction led to their work with Ace Books.

The Dillons’ association with Ellison continued for over 50 years. Their latest creations included the artwork for his Nebula-winning short story “How Interesting: A Tiny Man” (Realms of Fantasy, February 2010).

Leo and Diane Dillon's art for Ellison's "How Interesting, A Tiny Man."

3 thoughts on “Leo Dillon Passes Away”