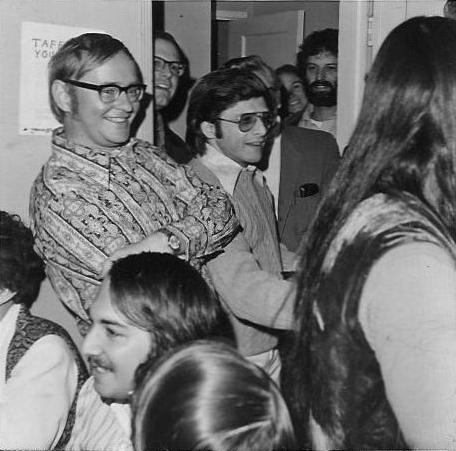 By Mike Glyer: Early in Ian Fleming’s novel Moonraker James Bond is driving at night and spots an ominous neon sign flashing the message HELL IS HERE over and over. He rounds a hillock and once the sign is in full view sees it’s only an advertisement that SUMMER SHELL IS HERE. But I’m sure the Friday night card players would have loved adorning the Los Angeles Science Fantasy Society clubhouse with the neon sign James Bond thought he saw in the days when we were obsessed by a game called “Hell’s Bridge.”

Two regulars at the game were Jack Harness and Bruce Pelz, legendary fans who both passed away within the last year, Jack on July 13, 2001 and Bruce on May 9, 2002. Mourning the loss of two of the best-known fans of their generation is appropriate, yet so is joyfully remembering their great humor and colorful personalities. I spent many hours together with them in LASFS activities, often at the card tables. The best moments sounded like this:

FRANK GASPERIK: I bid five.
MIKE FRANK: A man with a long suit.
JACK HARNESS: With a trap in the back.
BRUCE PELZ: I know what kind of opening to give you.
JACK HARNESS: But…but…but…
BRUCE PELZ: You assed for it.
MIKE GLYER: (scribbling furiously) Pun slower!

Hell’s Bridge, never actually called by anything but its first name, preoccupied about a dozen players every Friday evening. The game bears a faint resemblance to bridge in that there is a trick-taking and a trump suit (determined by a cut of the cards.) But every player makes a contract for the number of tricks he expects to take, and the total tricks bid may not equal the number of tricks available (it can be under or over.) Since the onus of that rule generally falls on the last person to bid, the dealer, people constantly refer to the “DDA” – dealer’s disadvantage.

Hell is a comparatively inexpensive game to lose: a bad night would set me back the equivalent of a burger and Coke. Yet playing Hell still inflicted all the intensity and madness of more prestigious games like poker. (At least, I never envisioned Bret Maverick saying, “My daddy always told me ‘Never gamble, stick to Hell’s Bridge.’”)

The legendary LASFS poker games went away in the mid-70s when the hosts of the old Thursday night gatherings gave up in exhaustion and the games weren’t allowed to move into the new clubhouse. Members believed even penny-ante gambling would surely lead to a police raid, whereas poker without betting is even duller than a bar without booze. On the other hand members did allow Hell to be played there because it was tracked with a scoresheet, not played with chips or cash, and not hostage to the potential nightmare of the club’s five-and-dime riverboat gamblers wallowing in their loose change when the LAPD kicked the door and charged in with the vice squad.

As Hell grew in popularity those of us who had an early start in the game profited greatly from the neos who came along and received an expensive education. But time was not on our side. In the good old days, Jack Harness finished cleaning out one table full of players (while the LASFS Board of Directors met in the front room), threw open the door, hollered, “Fresh fish!” and they came running to fill up the next game. All too soon, all the new players became competitive. It got very rugged for all but the best. Even Bruce Pelz and Jack Harness had runs of ill luck that were mercilessly exploited. That produced some mythic bursts of temper. Long has the story been told of the night Pelz, hosting a game at his apartment and doing badly, ripped the leg off his card table and chased the players into the night. Doubt it if you like. I can only testify that I never saw him rip a leg off a card table…

Other legends of the game included Marty Massoglia. He gained fame as “Captain Suicide” during a phase when he started jumping to conclusions about whether he would make his bid on a hand, and when it looked bad to him, he abandoned all pretense of making his bid in order to prevent others from making theirs. Conversely, Mike Shupp’s brief career at the Hell table earned him the nickname of “Robin Hood,” because he would junk his chances to make his own hand in order to sabotage a player he felt had bid too ambitiously.

JACK HARNESS: I don’t want to sit on the right hand of Captain Suicide.
BRUCE PELZ: Then sit on his other hand and we’ll both be out of trouble.

Those of us who frequented LASFS card games in the early 70’s saw that Bruce tracked his wins and losses in a pocket diary. While his memory was famous — thus his nickname, the Elephant – he was also a prolific list-maker and recordkeeper. With the advent of personal computers Bruce was soon keeping track of everyone’s wins and losses. Once accounts were settled for the night, Bruce would take the scoresheets home and enter the data. He assigned everyone a “handle” — real names were not used on the printouts. Years passed and we still expected the place to be raided by the vice squad at any moment.

The players with the cumulative best records were dubbed “The Hell-5 Society.” The top five scorers of the year got first crack at playing in the game held at the Nivens’ New Year’s Eve Party.

Players who were cumulatively in the black were referred to as “lifetime positive.” I think I was about $20 to the good when I stopped playing regularly after 15 years, so what was that, an average winning of slightly more than a buck a year? But as more newcomers came along and joined the minus column, a mystique grew up around anyone who had managed not to give all his money to Pelz and the other sharks.

If (in the parlance of comic collectors) Hell’s Bridge represented the Silver Age of LASFS cardplaying, its Golden Age had been the weekly poker sessions at the Nivens’ house in Brentwood. There was an endless parade of great fannish names through the game (I would like to have played poker against Dick Geis). Those poker games were, in fact, the reason I joined LASFS. Joe Minne lived upstairs in our dorm at USC and said he often went to club meetings and then went over to Larry Niven’s house to play poker.

The first time Joe took a couple of us with him, he turned his ancient Ford T-Bird off Sunset onto a dark side street whose mist-shrouded lamps must have inspired “Of A Foggy Night.” When we got into the house Larry Niven said hello and asked Minne, “Can you vouch for these two?” Insuring the integrity of the poker game was probably the least reason Niven asked for assurance: what mattered was the art collection. His home was like a year-round Worldcon art show, walls covered with huge framed Tim Kirk drawings and Wendy Pini original pastel paintings. The burglar alarm system would be no protection against light-fingered fans pretending to be poker players.

I kept going back and the welcome became warmer. After all, I had the one utterly endearing trait of losing quietly, though I could only afford to lose about $3 and then I was done for the evening. Once I accidentally left with a poker chip in my pocket and endured the embarrassment of calling Larry to confess because I needed to be able to get my dollar back next week. Joe Minne, on the other hand, answered each setback by opening his checkbook and saying, “Ahhhh!” I played at the cheap table, hosted by Fuzzy Pink Niven, and there was also a “blood” table where Larry presided over sharks like Jerry Pournelle, whose skill kept him from ever having to fill out the worn personal check he tossed in when he drew his poker chips to start the night.

A certain machismo compelled a few to play at the “blood” game who weren’t equal to it and they made losing their rent a routine, prompting Larry to conclude that “Some people win by winning, and some people win by losing.” There was a high level of pseudo-psychiatric analysis: if you screwed up at poker, your whole lifestyle was bound to be called into question. And for someone losing $200 within a few weeks, this was not unreasonable.

The Nivens set a generous sideboard for these games, which some visitors managed to abuse by melting cheese all over the toaster oven or helping themselves uninvited to the good brandy. The Nivens resorted to posting a dittoed “Rules of the House” which I regret not having kept. At last they moved out of Brentwood and the club relocated to the San Fernando Valley. The era of poker games breaking up at dawn came to an end – and descended into Hell.