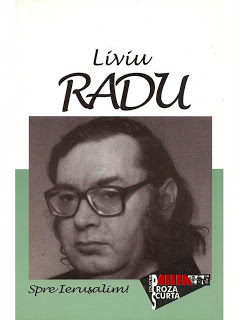 His first published story, “The Unseen Face of Planet Mars,” appeared in 1993. He developed into a prolific author – see his credits in the Europa SF obituary, which is liberally illustrated by the cover art from his books.

In 2000 he received an Encouragement Award from the European SF Society (and was renominated for the award in 2010).

The Internet SF Database shows two of his stories have been translated and published in English. “Alone on Omuza” was in the Romanian SF Anthology Nemira ’96 (1996) edited by Alexandru Mironov and Sebastian A. Corn. “Digits Are Cold, Numbers Are Warm,” was translated into English and published in the Anthology of European Speculative Fiction (2013) edited by Roberto Mendes and Cristian Tamas.

He founded the Ion Hobana National Colloquium in 2010, a conference about Romanian sf and fantasy.

Radu also distinguished himself also as a translator with titles belonging to the authors such as Isaac Asimov, George R.R.Martin, Neil Gaiman, China Miéville, Abraham Merritt, and Dean Koontz.