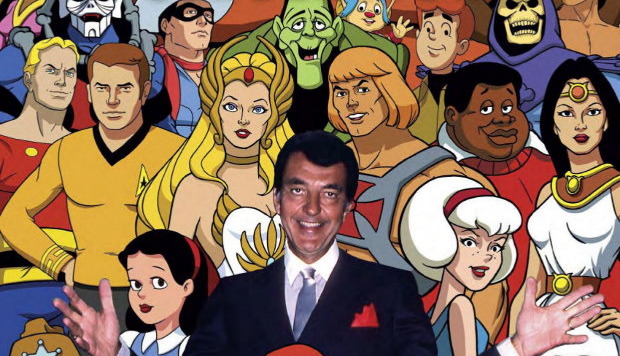 Lou Scheimer, co-founder and president of Filmation Associates, has passed away at the age of 84.

Filmation produced animated and live-action programming from 1963 to 1989, including the Emmy-winning Star Trek: The Animated Series, which featured most of the original cast and included scripts by well-known sf writers.

Scheimer studied art at Carnegie Tech in Pittsburgh after the end of World War II – in fact, he used to walk to school with Andy Warhol.

I remember, in the early 1950’s, starting to see some animated films that were so unique, so daring, and so unlike anything that anyone had ever done, that I became intrigued with animation. The studio called UPA, which no longer really exists, was just beginning then. They did the “Gerald McBoing Boing” things, the “Magoo” stuff and the Thurber films. Each one of those was like a little moving painting and when you saw those, they were just marvelous. You said to yourself, “Wow, look at what people are doing out there. They are making art move!” These were all classical animation, I mean, they were not stop motion. This was people drawing paintings. They did wonderful graphic things.

— Which is rather ironic when you consider the cost-cutting animation techniques Filmation became known for.

But it’s not as if in the beginning Filmation had any choice. The studio had two employees, Scheimer and Hal Sutherland, and put a mannequin out in front as a secretary because they couldn’t afford anything else.

They were rescued when Fred Silverman, then a newcomer at CBS, asked DC Comics for a Superman animated show to air on Saturday mornings. Norm Prescott, who would join the business, helped them get the work. A prerequisite was to give a DC Comics rep a tour of their studio. Which basically didn’t exist. Scheimer stalled for two days while he packed the studio for the visit.

So I called the guy; his name was Whitney Elsworth. It was like a Friday or a Monday. I said, “I’m sorry Mr. Elsworth, but we really don’t have visitors here during the working day. It’s just too difficult. People can’t concentrate. If you could come next Wednesday lunch, we’ll show you through the studio and show you what we are doing.” So I had like two days. I called everybody I knew. I called Ted Knight. I got him to come down. I called Kim Wong, an assistant animator I knew. I called a guy who had a fan mail service named Jack Mock. I called a couple of animators from Hanna Barbera who could only come down at lunchtime. I called a guy across the street whose name was Harold Alpert who was an accountant. Thank God he did not show up because it turned out that Whitney Elsworth knew him. If he had seen Alpert sitting there pretending to be an animator that would have blown the whole thing.

Elsworth walked in, and I had the place packed. Don Peters was in there pretending to paint backgrounds. We had passed out scenes from “Oz” to all the people. We borrowed a moviola to make it look like we really had an editorial department. I had done this once before when we tried to get a “Lone Ranger” to do, so I had experience in packing the studio. This was the second run through. I told the damned Ted Knight not to say anything because he had a tendency to overact. I said to him, “The guy knows something about our business. If he asks you any questions, just tell him, ‘I’m sorry I can’t talk to you right now, there’s some trouble at the lab.’ Just pretend you’re on the phone or something.”

Well, Elsworth comes in and the studio is humming. We even had the mannequin out there, but the mannequin looked O.K. We had like twenty people in there. Everybody was furiously at work, but it was twelve o’clock. Half of the guyshad to take off soon to get back to work. We showed Elsworth some of the stuff from “Oz.” We were sitting in our little office that Hal and I had, well it was really a pretty big office, discussing things. There was a knock on the door. It was George Rowley, and I knew that George had to get back to Hanna Barbera. George opens up the door and comes in. He said, “Lou, I got this tooth ache. Do you mind if I take off and go to the dentist?” I said it was O.K. So George left. I turn around to Hal and said, “Make sure you dock that son of a bitch!” Then all of a sudden we hear, “There’s trouble at the lab, trouble at the lab, tro…” in twenty different voices. Ted Knight is running around pretending he’s a lot of different guys, yelling that there’s trouble at the lab. Elsworth said, “What the hell is going on. You guys must have an awful lot of work for there to be that many guys involved with trouble at the lab.”

Whitney left. He called back to New York and said, “It’s a little studio, but they seem to run a pretty tight ship down there.” So this guy who’s running DC Comics, Jack Libowitz, trusted us without a completion bond or anything. He gave us the job to do. It was our first network show.

Three years later, in 1968, Filmation enjoyed its greatest success, a cartoon series based on the comic strip Archie, with musical segments produced by Don Kirshner. The crowning glory of the show was The Archies’ musical hit “Sugar, Sugar,” the second-highest selling record of the 1960s, its sales surpassed only by the Beatles.

Nevertheless, Scheimer said the most satisfying series he ever worked on was Fat Albert and the Cosby Kids, where subject material was approved by a panel of educators, child psychologists, sociologists, and anthropologists, who also met with the scriptwriters, all working together.

Filmation made live-action shows, too — Space Academy, its spin-off Jason of Star Command, Ark II, Shazam!, The Ghost Busters, and The Secrets of Isis.