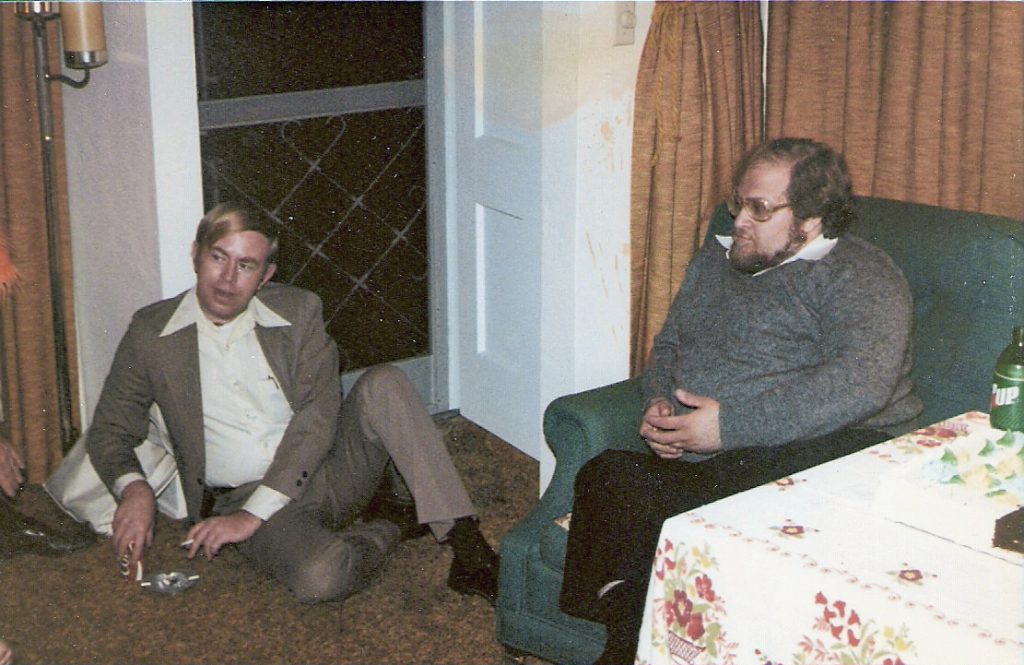 Milt Stevens and Craig Miller in 1981. Photo by Dik Daniels.

Past Worldcon chair and fanzine fan Milton F. Stevens died October 2 of a heart attack, after entering the hospital with pneumonia and other medical problems.

Milt attended his first Los Angeles Science Fantasy Society meeting in 1960 at the age of 17. “I’d been reading science fiction for years before that, so the slide into real fanac was easy,” he wrote. He discovered the club through fan-news columns in the prozines.

During the Vietnam War he served in the Navy. Milt always attributed his baldness to shiptime service in the smoking-hot climate of the South China Sea.

By 1970 Milt was President of LASFS — he signed my membership card when I joined. He was somebody to look up to who also became a good friend.

Milt won the Evans-Freehafer Award for service to the club in 1971. He was on the LASFS, Inc. Board of Directors for a couple of decades, and was Chair for around five years. After the original LASFS clubhouse was bought in 1973 Milt dubbed himself the “Lord High Janitor,” having taken on the thankless task of cleaning the place.

An exception at the usually inward-focused LASFS, Milt was among the club’s few nationally-active fanzine publishers and fanpoliticians. He put out an acclaimed perzine called The Passing Parade. He coedited and bankrolled later issues of my fanzine Prehensile. For many years he was a member of the Fantasy Amateur Press Association (FAPA). 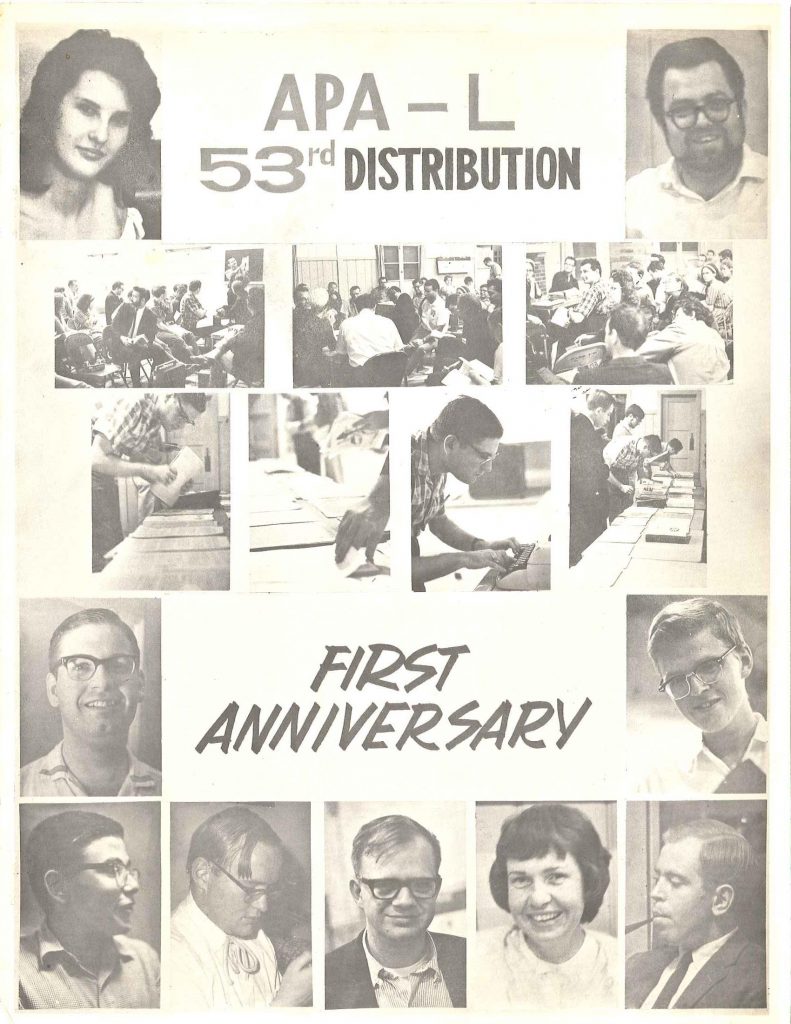 1965 APA-L photocover — Milt Stevens is in the lower right corner.

Milt was a gifted humorist, dry and cynical, as though he was equipped with a set of glasses where one lens showed him what should ideally be happening in a set of circumstances, while the other showed him what was really happening, and he could juxtapose these two visions in a provocatively funny way. Milt would subtly include himself among the targets of his joking criticism on some level, however, people who didn’t know him rarely recognized that, and he struggled with the fact that such humility no longer defused people’s wrath in the internet age.

For awhile in the 1970s, Milt, Craig Miller, Elst Weinstein and I got in the habit of meeting for dinner at Mike’s Pizza in Van Nuys. Ed Cox or Ed Finkelstein joined us a couple of times – so that the rubric for these get-togethers became (1) always invite somebody named Ed, and (2) always order “pizza ala cruddo” (as we called pizza with everything). Being a comparative newcomer to the club, I looked forward to hearing Milt reveal all the inside LASFS lore – the Chart, Coventry, The Game of Fandom, and why never to mention spaghetti to a certain member.

He also gave us some early insights into conrunning and bidding for conventions. He was Chair of LA 2000, the original Loscon (1975), and later the 1980 Westercon. And he co-chaired L.A.con II (1984) with Craig, which still holds the attendance record.

Milt worked for LAPD for 32 years, mainly as a civilian crime analyst, a career that gave him a fund of cop stories — all punctuated with violence — like the one about a legendary detective who had (cumulatively) fired his gun five times and killed six people. “How was that?”, listeners always asked. The sixth was in a fight after taking away the guy’s knife. His job also unexpectedly put him in the position of attending a training session where the speaker analyzed the “Satanic symbolism” of such things as – the artwork on the cover of the 1984 Worldcon Souvenir Book.

The most indelible memory I have about Milt’s character is something that happened when the first LASFS clubhouse was on Ventura Blvd., near a T-intersection with Tujunga Ave. One evening a driver took the turn onto Ventura too fast and flipped his car. It skidded on the roof and came to a stop just a few yards down from the clubhouse, engine still turning, and smelling of leaking gasoline. I was with the people who collected at a safe distance, replaying in our imaginations TV show stunts of exploding auto wrecks. Milt, on the other hand, ran to the driver’s side and got him out. That’s what a man’s supposed to do.

Appreciation for his fannish contributions came when Milt was made GoH of Loscon 9 (1982) and Westercon 61 (2008).

I personally had Milt to thank for getting me to start working out at a gym, as he did. For a few years in the Eighties I lost weight and looked as good as I ever would.

He remained active in LASFS all his life. I got to share a table with Milt, Marc Schirmeister and Joe Zeff at the LASFS 75th Anniversary dinner in 2009.

Earlier this year he programmed the 2017 Corflu, the convention for fanzine fans, when it met in Los Angeles. (See Milt’s conreport here.) The chair, Marty Cantor, announced today, “I will say it here, he personally paid off the con’s $1200+ budget deficit, and he did so happily as he felt that Corflu was a fannish good and he wanted this series of cons to continue.” Other fans wrote on Facebook about how much they appreciated the conversations they had with him about fanhistory. Milt was passing the torch, and those younger fans learned from him the stories behind fandom’s traditions and legends.