At the Worldcon in 2006, Forrest J Ackerman gave a talk entitled “My Life Inside a Time Machine” in which he mentioned the Bradbury Building. Fanhistorian John L. Coker III recorded and later transcribed his remarks, and included them in his book Tales of the Time Travelers.

(Forrest J Ackerman) “My grandfather, George Herbert Wyman, was the architect of the legendary Bradbury Building, featured in Bladerunner, and Wolf, and Demon with a Glass Hand, and many mundane movies. It was interesting the way it came about for him to architect that building. He had never even done a doghouse. He was an apprentice in the office of the best-known architects of the day, and he had read the bestseller, the science fiction novel Looking Backward by Edward Bellamy. It is a story of the man who went to sleep in 1895 and woke up in the year 2000. In the novel there was one page that described the interior of an office building in the year 2000. My grandfather was just making some little designs bringing that page to life. Bradbury looked over his shoulder and said. “Well, young man, that’s the kind of a building I want.” My grandfather said, “Gee, I’m only an apprentice here. I don’t know if I should take the job away from my boss.” Bradbury said, “I want you or nobody.” 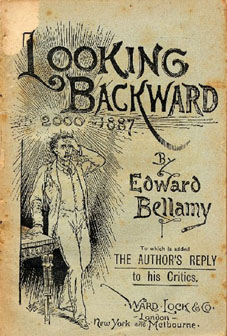 Coker published Tales of the Time Travelers in 2009 in an edition of 26 signed, slipcased copies, with many copies being presented to the contributors. The few remaining copies sold immediately for the list price of $500. (Beware if you see an offer for a free download of the book. Coker says, “There seems to be a bad person online who is doing some type of scam, whereby if one clicks on a link, some type of problem occurs. I do not recommend that you click on any links. I do hope to reprint the book in softcover in the future.”

6 thoughts on “More on the Bradbury Building”