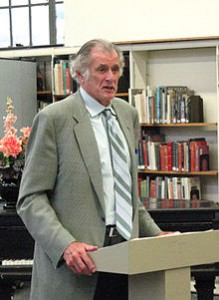 Frank Deford, for decades a writer and editor at Sports Illustrated, and briefly top editor of “The Greatest Paper That Ever Died” – The National sports daily that lost $150 million, has published a memoir titled Over Time: My Life as a Sportswriter.

Deford is a character right out of Mad Men, little affected by the 21st Century. And when his path crossed Isaac Asimov’s in 1975 the Good Doctor was in typical form (a form considered here last autumn in “Monsters of the Idway”) —

One of my first books was a light cultural history of Miss America, There She Is, so I got invited to lots of book functions for women, in order that I might regale them and thus have them rush out to purchase my tome. At one of these sessions, a book-and-author luncheon in Hartford, another of the speakers was Isaac Asimov, who wrote something like eight thousand books – sometimes I think it was a dozen or so a week. He titillated the little old ladies by saying, “All I can do with my hands is type and sex.”

I thought: you are my brother. 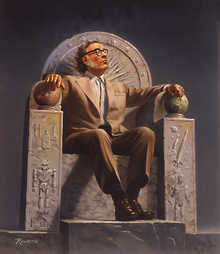 (Anyone looking at their pictures might be tempted to take that literally – twins separated at 65.)

Deford tells several stories like this (the rest are about athletes), assuming an appreciative audience among older sports fans, but assured of a mixed reception in the sf field.