By James H. Burns: There was a time, when we all were scientists…

Or many of us wanted to be!

There were certain hallmarks of growing up somewhere between the 1950s and 1970s, if you had an interest in science…

First off, were those amazing How and Why Books of Wonder. The artwork in many of which is still superb, and whose texts, in certain editions, remain first class introductions to their subjects!

The most unusual element to these volumes may have been what in New York, anyway, seemed to be their excellent distribution in pet shops!  In both local pet stores of my youth (one of which occasionally had a tiger on display!), were spinner racks filled with the books. 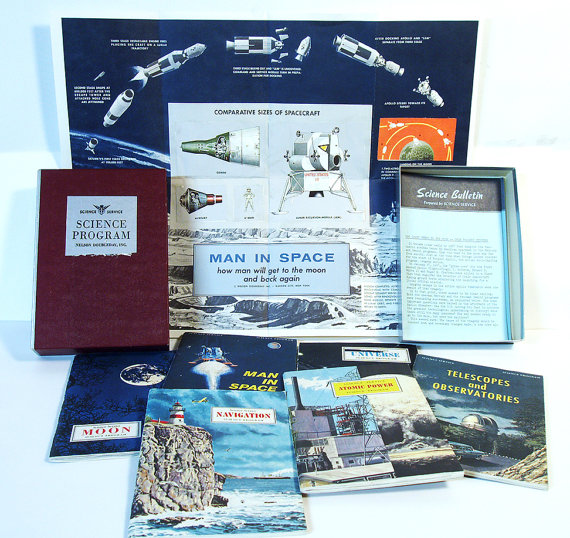 The Science Program 5-1/2 by 8-1/4 inch volumes, were offered as  a monthly subscription  from Nelson Doubleday Inc. Each sixty-four page “digest” was in two-colors, but their special feature was a centerfold of beautiful full color photo stamps, which the reader could then attach in the appropriate “boxes” throughout the book.

Album slipcases which could hold a number of the volumes were also included with the subscription membership.

(Doubleday also used this overall format for other series, including the National Audobon Society Nature Program and the American Geographical Society Around the World Program.) 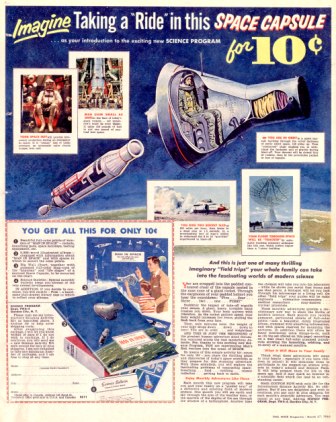 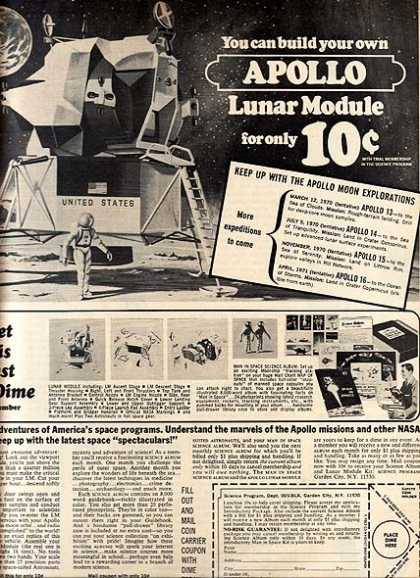 Different Introductory membership kits throughout the 1960s, could include a poster, as well as the Mercury model seen here.  By my era, in the early 1970s, the model offered was a lovely rendition of the lunar module on the moon, with Neil Armstrong and Edwin “Buzz” Aldrin upon the surface. 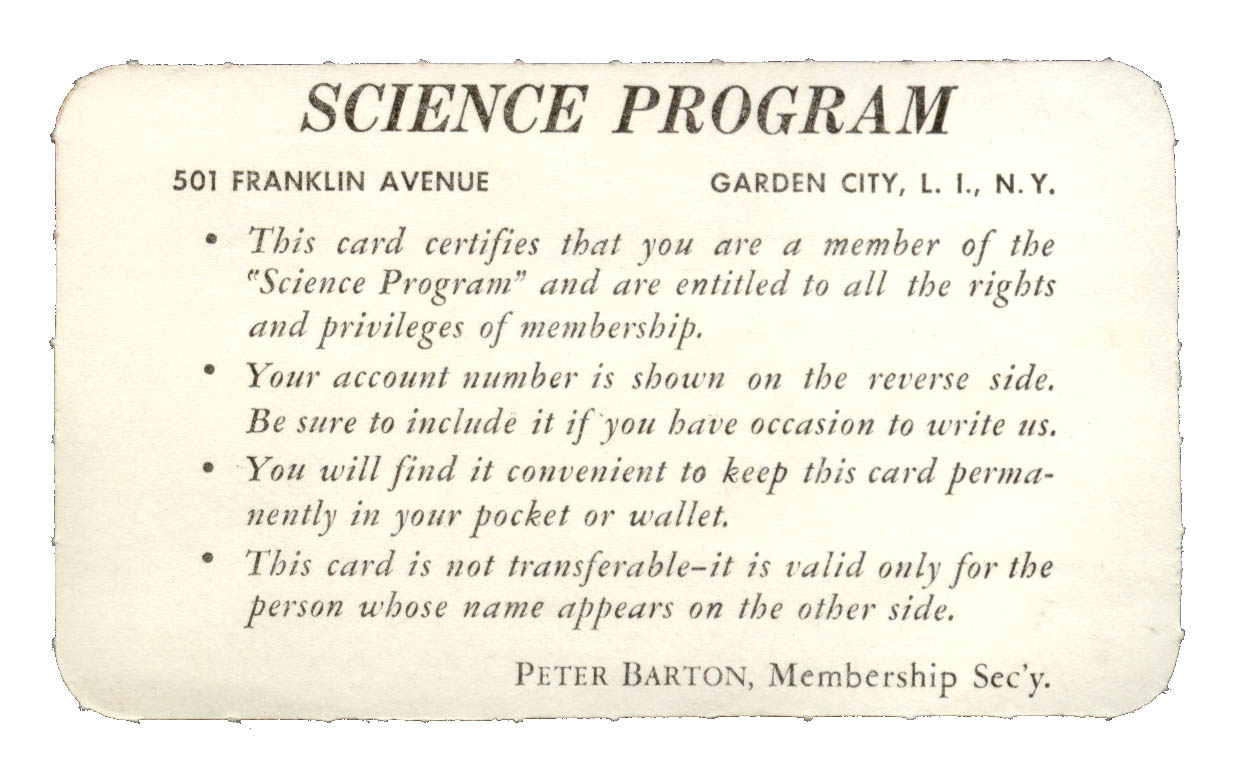 “The Science Service,” itself remains an active organization as the publishers of Science News magazine.

With a name-change to the Society For Science and the Public in 2008,the group also publishes Science News For Students online (as well as The Science News website), and is one of the sponsors of the Intel Science and Engineering Fairs and Talent Searches, and other events.

Its contributions to the children of another time were also significant, on many fronts.

The Science Service was launched in 1921 by newspaper publisher Edward W. Scripps and California zoologist William Emerson Ritter, under the name the American Society for the Dissemination of Science, as a news service to make the latest scientific information available to the public. One year later, they started distributing their own periodical, Science Newsletter to “satisfy curiosity from educators, and the general public.”

One of the group’s greatest boons to youthful encouragement was their series of small science kits, Things of Science. Each month, a new small blue box (or sometimes a manila envelope) would be sent out, containing several “samples;” or the parts to make a basic but effective apparatus (some times out of cardboard cutouts!)  or other material, along with a miniature pamphlet with experiments.

Things of Science was evidently the invention of Watson Davis, who was director of the Science Service from 1928 until 1967. It developed when the Service would send out samples to accompany articles. Things of Science officially commenced in 1940, and it was soon realized that its main audience was schools and science clubs, and other youngsters!

(One early mailing contained dinosaur bones, pounded into slivers, so that every member could have his own prehistoric specimen!)

Things of Science was sold to another company in 1981, who kept the club going for another nine years.  Historian George B. Moody says that at some point, the Science Service reacquired the rights to the series….

There were other instruments of wonder in many like-minded American homes. I can’t remember a time when my Dad didn’t have a “Star-Finder” in one of his bookshelves.

And the Edmund Scientific catalog was filled with a cavalcade of delights.

Intriguingly, I don’t remember my family ever actually ordering anything from the catalog, but it was the possibilities that were always so enticing. (I must admit, I still would like six-foot weather balloon, although I’m not quite exactly sure why…) 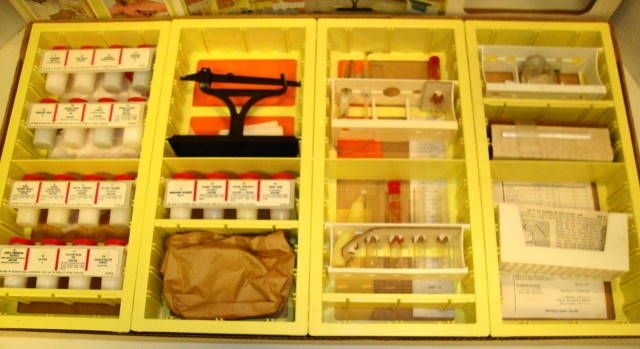 And then, there was the Gilbert Chemistry Set….  An astonishing amalgam of chemicals and equipment, and experiments neatly printed out on index cards. I set up my “laboratory” on an old desk in the basement.

What, exactly, was I hoping to discover, as a ten-year old?

But I can still remember the sense of trust implicit when my father said I could use the bunsen burner on my own. And the thrill when my folks picked me up my first Erlenmeyer flask.

Earlier, there had been the fun of working with the microscope my Dad passed on down to me. And there were always a couple of telescopes somewhere nearby. But for some skygazing, it was my father’s World War II binoculars, brought home from Europe in 1945, that seemed to be the most stable.

Somewhere around my house were copies of Popular Science, Mechanix Illustrated…  Set apart, in a special place, were the Life magazine issues from 1955 debuting “The Epic of Man” series (with extraordinary depictions of primitive humanity), and the still remarkable Complete Book of Outer Space, from 1954.

Surely, there were signposts of your own scientific life as a girl or boy.

But all these ruminations lead me to one more pioneer of our nascent knowledge, someone who helped educate the young in years and temperament for over a couple of generations, through some of the most crucial periods of our history.

When I was a little boy in the 1960s, there was a column in the newspapers, “Uncle Ray’s Corner.” (I suspect that the feature was in The New York Post, back when that was actually considered New York’s liberal newspaper.)

I can remember being disconcerted when Uncle Ray’s column was suddenly gone from the daily, just a while after I had discovered it. Like other kids, I had clipped and saved some of the installments, in a notebook which was now destined to have too many empty pages.

I remember “Uncle Ray’s Corner” as being a science column, an early stop for those enchanted by the era’s sense of exploration. But apparently, the articles were across a wide range of subjects, anything that might interest a school-age child.

My parents actually said they remembered “Uncle Ray,” from their own younger days, but I didn’t see how that was quite possible…

Until the dawn of the internet.

When I finally got actively online, later than many, in 1999. I’d occasionally look for information about Uncle Ray, but with little luck. Whatever kindness and good fellowship of awareness had been in his columns, had made an impression that lasted decades.

Suddenly, years later, I was able to begin finding listings for some of his old books.

Commencing in the late 1940s, Coffman was also responsible for Uncle Ray’s Magazine, subtitled “Adventures in Fascinating Facts.” It seems to have been devoted to any of the myriad of historical, scientific and current world events that might interest kids.

A few years ago, an obituary tribute to Coffman popped up from the Madison Wisconsin Central High School Records.

The obit says that Coffman was born circa 1896, in Indianapolis, and grew up in Madison.  He attended Yale and Columbia Universities, as well as the New York College for Social Research, and earned a Bachelor’s Degree from the University of Wisconsin in 1927.  Coffman lived in Shorewood Hills, Wisconsin from 1935 until 1949, and then resided in several states, “often returning to Madison.” 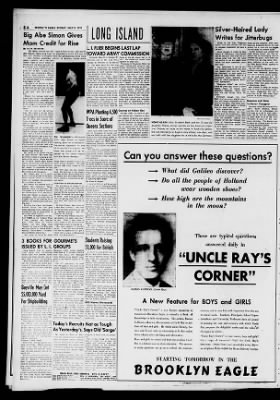 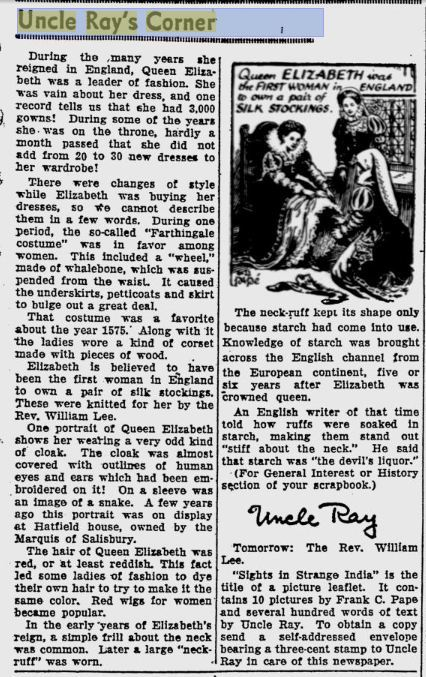 “Uncle Ray’s Column” was launched around 1925, “to teach children about science.” Appearing in many newspapers in the United States “and several foreign countries.” It ran, it seems, through 1970.

Why all this curiosity from me about Coffman?  His column was from a time when more of our society celebrated the simple pleasure of knowing about things. It’s extraordinary to think that Coffman’s career as a popular educator spanned the time before jets, and the splitting of the atom, and, of course, the space age; from before the Depression, to the heart of the tumult and joy of the 1960s…

The internet must be a godsend for scientifically inclined children, but the beauty of a column like Ray Coffman’s was that it was there for anybody in the newspaper, from a precocious tot to a like-minded adult.

Surely, those who helped set so many of our paths of exploration should be remembered!

It strikes me as sad that someone like “Uncle Ray” has so little trace on the web. I’m hoping that some here can help expand our familiarity with this gentleman of elucidation.

I also have a somewhat selfish wish.

In the late 1960s, I sent in a request to the column: just for the asking, a reader could receive a special certificate proclaiming that you belonged to Uncle Ray’s club (or legion of fellow junior wonderers!).

I had that yellowish heavy-stock proclamation, attached to my science scrapbook from the 1960s, until less than two years ago, when due to an awful calamity, almost all my collection was destroyed.

I’ve found no sign of the Uncle Ray “diploma” anywhere on the net and would love to see it again.

(I had planned on scanning it, along with many other irreplaceable mementos from the era, and later, other histories.)

In fact, all the books and items seen here were once part of that assemblage.

But all these totems of the future, very happily, belong to all of us.

They are always nice to revisit, and remember such gifts of inspiration, and strive to create such passages for all our tomorrows.

30 thoughts on “Once, When We All Were Scientists”