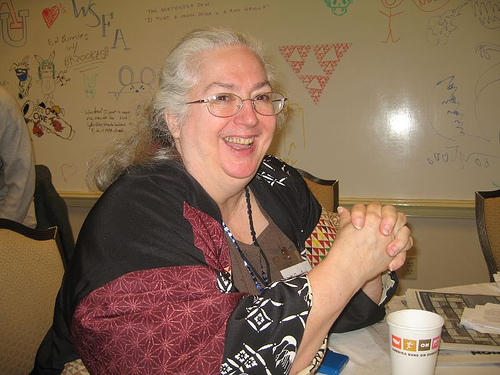 Peggy Rae Sapienza at the 2007 Capclave. Photo by Ellen Datlow.

Peggy Rae Sapienza, one of fandom’s most admired conrunners and fan guest of honor at Chicon 7, the 2012 Worldcon, passed away March 22 from complications following heart valve replacement surgery. She was 70.

Her highest profile achievements were chairing the 1998 Worldcon, Bucconeer, and co-chairing the 2014 World Fantasy Con. She also served as Vice Chair and then Acting Chair of the 1993 Worldcon, ConFrancisco, helping stabilize the committee in the period after chair Terry Biffel died and before the appointment of Dave Clark as chair. In addition, she chaired two Smofcons (1992, 2004) and a Disclave (1991).

People liked to work for her — including some who thought they were done volunteering before she called. Peggy Rae’s unique leadership style combined playfulness, the appeal of being admitted to an inner circle, knowledgeability, and a frank demand for results.

She had an unlimited resume in many areas of convention organizing – press relations, program, registration, guest of honor book, and exhibits. She also felt it was her mission to pass on the skills and experiences she possessed. A number of the current generation of Worldcon organizers called her a mentor and today are mourning her loss in their own way. “I feel like a whole library just burnt down,” Glenn Glazer wrote on Facebook.

Peggy Rae was a second generation fan whose father, Jack McKnight, mother, Buddie McKnight Evans, and step-mother, Ann Newell McKnight, were involved in the Philadelphia Science Fiction Society, while her step-father, Bill Evans, was active in the Washington Science Fiction Association. (Jack McKnight is specially remembered for making the first Hugo Awards in 1953.)

Growing up in Philadelphia fandom, in the late 1950s she served as Secretary and Vice President of PSFS and worked on and appeared in PSFS’ fan-made movie “Longer Than You Think.”

She began publishing Etwas in 1960. Ed Meskys recalls, “We traded fanzines at the time, her Etwas (German for something) for my Niekas (Lithuanian for nothing).” 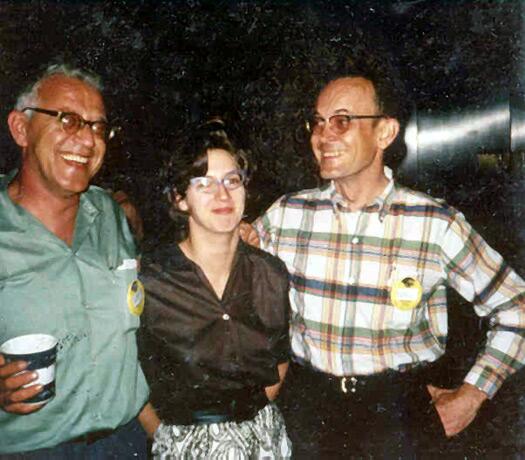 One of Peggy Rae’s enduring contributions to how Worldcons use facilties is the ConCourse, which she and Fred Isaacs invented for the 1989 Worldcon, Noreascon Three. The Sheraton had denied the use of its facilities to the con due to some problems, forcing the committee to create attractions in the Hynes Convention Center to compensate, or later, when they regained the Sheraton through litigation, to keep crowds in the Hynes for the sake of peace with the hotel. Their solution was the ConCourse which, with the Huckster Room and the convention program, gave members ample reason to hang out in the Hynes.

The ConCourse amalgamated fanhistory exhibits, convention information, the fanzine lounge, the daily newzine publishing area, convention bidding and Site Selection tables, and a Hynes-run snack bar in one place, and layed it out as an indoor park. Fans responded so positively the idea was used repeatedly by future Worldcons, and many of the exhibits Peggy Rae commissioned are still being presented.

This was also when the expression “I mowed Peggy Rae’s lawn” originated. Some of the planning for Noreascon 3 took place at her house, she explained during a 2012 interview. A friend arrived before a meeting while Peggy Rae was gardening and offered to help. In a kind of Tom Sawyeresque moment, others came by and joined in the gardening. Joe Mayhew was a witness, and years later warned people that if they voted for the Baltimore Worldcon bid they would end up having to mow Peggy Rae’s lawn….

The legend was celebrated by Chicon 7. Chris Garcia described how in a recent interview – and the way Peggy Rae used it to get some more work out of him…

At Chicon, there was a fake parcel of grass and a toy lawnmower with a sign marked ‘Mow Peggy Rae’s Lawn’ and the folks who pretended to mow got a Ribbon saying “I mowed Peggy Rae’s Lawn.” I did the mowing, but Peggy Rae refused me a ribbon until I did the [promised] Campbell [Award] exhibit…

For many years Peggy Rae was a key planner and motivator in the effort to preserve fanhistory. The Society for the Preservation of the History of Science Fiction Fandom, AKA the Timebinders, was formed at FanHistoriCon I in May 1994 in Hagerstown, Maryland, convened by Peggy Rae, Bruce Pelz, and Joe Siclari to gather fans of different fannish generations together to discuss the best ideas. 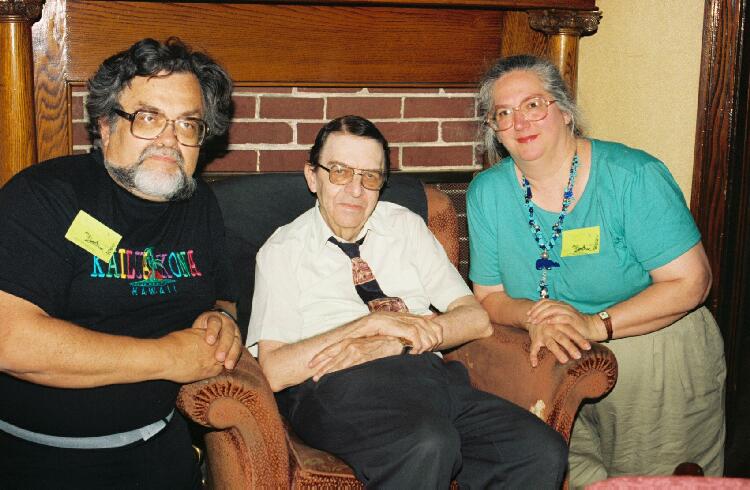 Peggy Rae worked 16 years as a contractor for the Department of Labor in Washington, D.C. in UNIX systems support, retiring in 2000.

In her later years she was instrumental in supporting the 2007 Japanese Worldcon as their North American Agent. She chaired SFWA’s Nebula Awards Weekend in 2010, 2011 and 2012, earning a tribute from John Scalzi. She was part of the DC17 bid for the 2017 Worldcon.

Just this past fall, Peggy Rae helped me put together a couple of programs for Smofcon 32 and I find it especially hard to accept that someone so filled with ideas, imagination and energy can be taken away.

John Sapienza’s announcement said about her last day and burial arrangements: “[On Sunday] the hospital called us to come in, and Eric & Wendy Pavlat, Missy & Bryan Koslosky, and I were with her when she passed…. She will be buried in Arlington National Cemetery with her first husband, Bob Pavlat. (*)”

Peggy Rae is survived by John, her two children, and eight grandchildren.

Update 03/24/2015: (*) Eric Pavlat in a comment below says that Peggy Rae will not be interred at Arlington, but will be buried this Saturday at Fort Lincoln Cemetery in Prince George’s County, MD.