Once at a Worldcon a panelist was fielding questions from the audience about a Boston bid. After insisting experience would keep them from repeating the mistakes of the past, he promised with a smile: “We will make only brand new mistakes that no one has ever made before.”

It’s not easy for a convention to make a mistake no one has ever made before. The Phoenix Comicon made a new one recently and attracted considerable criticism.

The Phoenix Comicon let Connor Leshner, a psychology and sociology major at Arizona State University, and a con volunteer, send a message to the convention’s email list asking fans to participate in an online survey.

A fan who took the survey described some of the questions as personal and intrusive, in “Phoenix Comicon’s Latest Survey Making Folks Feel Uncomfortable” at Geek Life:

Admittedly, I did blush when the question came across my screen and can now see why so many of my peers chatted it up on Facebook. Some readers even reached out to me to write about this survey because it was so out of the blue and asked so many intimate questions. However not all of the questions were about romantic or sexual relationships, some of them asked about your personal feelings regarding the fandom we know and love. 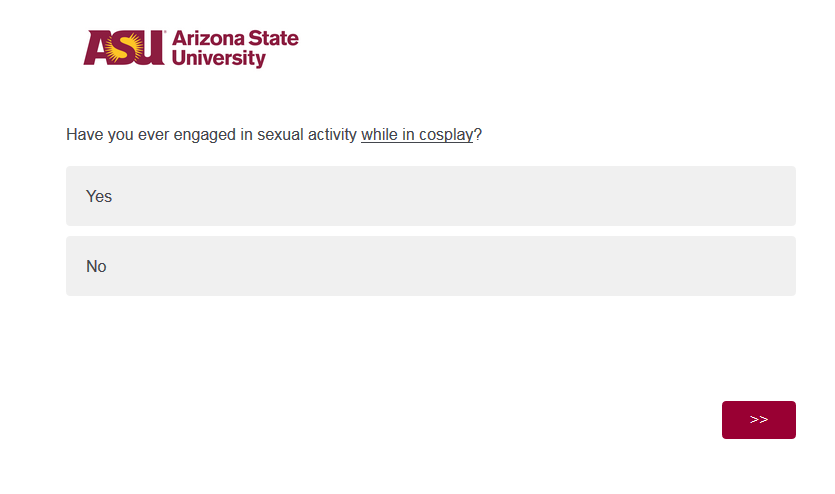 On March 3, Phoenix Comicon convention director Matthew Solberg responded to the report with an apology.

I made a mistake. I apologize for the survey sent yesterday and if you were upset, offended, or put off by it. I was trying to help a former long-time volunteer who is an ASU student with a research project. To my understanding, it is one of the first studies into cosplay behavior as it impacts social and romantic relationships. I rushed the decision without fully thinking through its implications and I rushed sending the webmail, as is evident by forgetting to remove the templates.

It was never, and will never be, my intent to subject minors to explicit material or to offend anyone.

While I still want to offer help to our friends and supporters whenever possible, I realize this was the wrong way to do it. I hope that you can forgive my mistake and trust that my intentions were not as they appeared.

I want to assure you that your email address was not distributed or sold to any third-party and no personal information was released. I will be much more careful in the future.

I’d like to say this was me trying to do a good deed that sadly backfired.