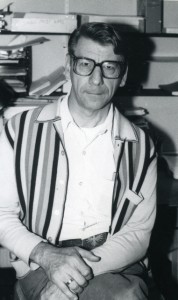 By Andrew Porter: Hugo award winning fanwriter and fanzine publisher Richard E. Geis died February 4th in Portland, Oregon. He was 85. No cause of death is known.

His death is recorded here.

Richard E. Geis was one of the finest fan writers and fanzine publishers SF fandom ever produced. His own writings, primarily in his schizophrenic “Alter-Ego” editorial role in his numerous fanzines, which were notoriously wont to change their names in mid-publication, are famous in the field. They gained him numerous Hugo Award nominations and many wins. His fanzines, which became focal point fanzines attracting numerous contributions from the finest writers, professional and fannish, and artists, also gained him numerous Hugo nominations and wins.

Geis was a legendary recluse, living his early and later life in Portland, Oregon, and in Venice, California, during his period of hyper-activity in the 1960s and 70s. Even when he lived in the Los Angeles area, he did not attend local fan meetings or conventions. I met him, once, in 1975, in Portland, at his home, while travelling the West Coast after WesterCon, accompanied by Jon Singer.

Many of his recent writings are available on eFanzines.com.