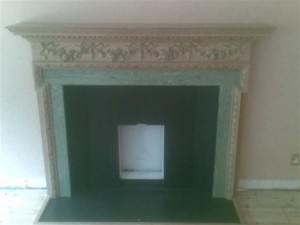 When demolition man Stephen Malton removed the fireplace from J.R.R. Tolkien’s former home, he found a few postcards behind it, including one that might be quite valuable:

The postcard [dated 1968] was addressed to Tolkien at the Miramar Hotel inBournemouth, where he and his wife Edith often stayed.

It is from “Lin,” which Malton believed could be fellow fantasy author Lin Carter who wrote Tolkien: A Look Behind “The Lord of the Rings,” published in 1969.

Depicting a scene fromIreland, it reads: “I have been thinking of you a lot and hope everything has gone as well as could be expected in the most difficult circumstances.”

What “difficult circumstances”? The cancellation mark on the postcard is datedJuly 9, 1968, so the message probably refers to Tolkien’s hospitalization on June 17. While Tolkien and his wife, Edith, were preparing to move fromOxford toBournemouth, he fell downstairs and injured his leg. Afterwards, as he told his son, Michael, “I was picked up off the floor of the hall and transported to the Nuffield [OrthopaedicCenter] as I was and never went back again – never saw my room, or my house again.” Doctors operated on the leg, and several weeks passed before Tolkien was allowed up on crutches.

Tolkien’s old carved wooden fireplace with marble inlay might go for $250,000. Malton says he’s been offered $500,000 to sell the fireplace and postcard in a package deal, but he still plans to auction the items. Good luck in making the most of your windfall. But to me the idea of a postcard merely addressed to Tolkien being worth a quarter million dollars sounds hallucinatory.

I wonder if any of my friends wrote to Tolkien in 1968? Of course, knowing what a bother Tolkien found his fans to be, no wonder that all of their letters landed on target inside the fireplace.

Note: This link can be used to access larger images of the postcard and fireplace.