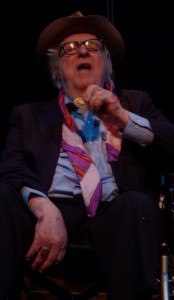 Ray Bradbury in 2009 showing a medal to the audience at a performance of one of his plays. Photo by Diana Glyer.

Ray Bradbury, cherished science fiction writer, attendee of the first Worldcon, and a member of LASFS since the Clifton’s Cafeteria days, died June 5 at the age of 91.

His daughter, Alexandra Bradbury, made the announcement. The Associated Press said she did not have additional details.

“He was a good man, and a major enabler of young writers,” noted Bjo Trimble.

The People Magazine website has already posted a fine appreciation of his career.

[Thanks to Bjo Trimble for the story.]