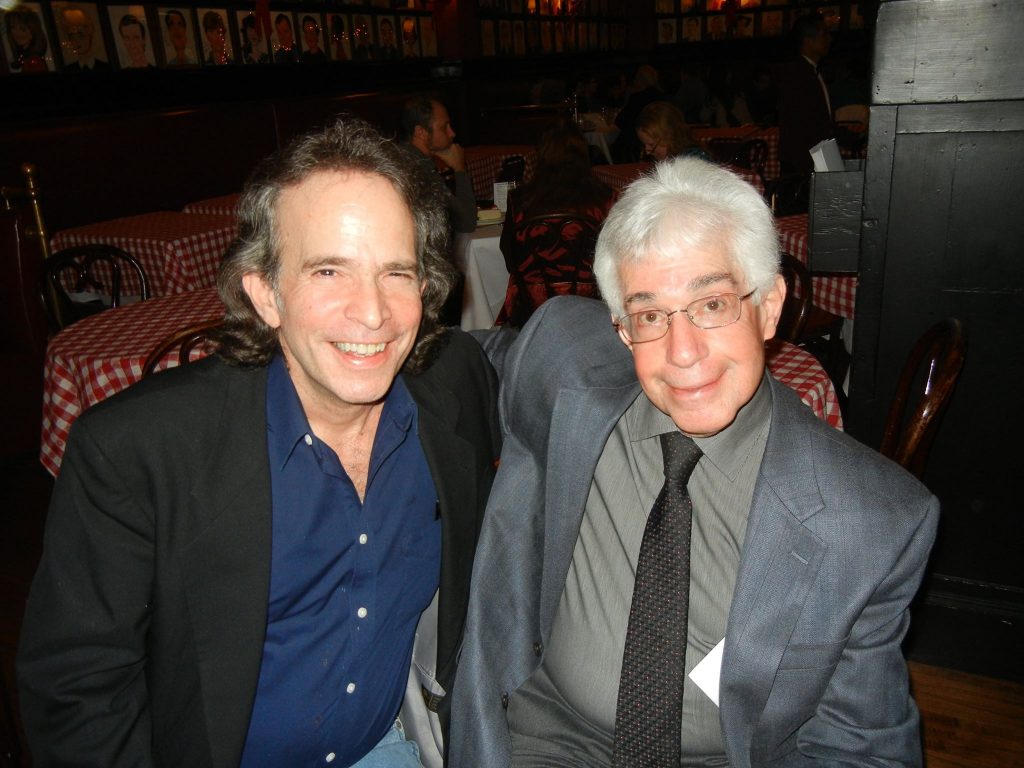 By Steve Vertlieb: With the late James H. Burns at Sardi’s in New York for dinner during a chilly Winter’s evening in December, 2014. Jimmy was one of my most cherished pals. He was my friend, my muse, my collaborator, and my brother. We would chat literally for hours each week into the proverbial “wee small hours of the morning.” We’d laugh, we’d argue, we’d celebrate the best and the worst in the arts and in life.

Jimmy was as “corny as Kansas in August,” but he could also challenge one’s core beliefs with spirited discussion, and overwhelming intellectual conviction. He was a passionate, tireless advocate of the arts, both in journalistic pride, as well as theatrical participation.

Jimmy loved baseball, and was its most inspired supporter. Whether arguing over the big leagues, or merely cheering on a tiny little league game on the corner of his block late one balmy Summer’s night, no one loved the game more than Jimmy.

His puns were terrible, and his laughter infectious. He could be maddeningly persistent in his sometimes self-righteous beliefs, and spirited interrogation, but Jim was never a phony. He stood by his own personal standards of equality and justice, and fought ferociously for his beliefs.

He was among the original writers and columnists for Fangoria Magazine, and a compelling contributor to Newsday, The New York Times and, in his final days, Mike Glyer’s Hugo Award winning File 770. Jimmy grew more introspective and, perhaps, melancholy in his later years, writing what amounted to sheer poetry in his brief, yet utterly charming and beautiful remembrances of days and years “past remembered”, but not forgotten.

He was among the most dedicated and creatively committed individuals that I’ve ever known. Jimmy was my conscience, and my shadow. When I nearly died seven years ago during major open heart surgery, he was my humorous cheerleader and spiritual angel, telephoning me often three or four times during a single day to make me laugh, and to remind me of just how special life could be.

I cherished our friendship, and revere his memory. I miss our infinite, often interminable telephone correspondence, conversations, and arguments.

Jimmy loved New York more than anyone I’ve ever known. It was during that sweet Christmas of 2014 when he enthusiastically “dragged” Shelly and I all over Manhattan to show off the vibrant city that he so loved.

He was a writer, an actor, a journalist, a film and baseball historian, and a deeply passionate human being. More than that, however, he was my brother, my champion, and my friend. I’m thinking of Jimmy today and always, but particularly on this poignant first anniversary of his untimely physical passing, and departure from this all too lonely planet, and remembering the wonderful James H. Burns. I miss you, dear friend. Rest well, Jimmy.

5 thoughts on “Remembering James H. Burns Who Died A Year Ago Today”