By Rich Lynch: I remember that I read the news of his death in the November 2006 issue of the newszine Ansible:

The life and death of one of the most important and notable British science fiction fans, reduced down to just a few lines of text.  That I hadn’t even known he was ill made it all the more disheartening to read.  I feel very fortunate that I became friends with Ron Bennett, and regretful that it happened only in the last decade-and-a-half of his life.  It started with correspondence, back in 1991, when I was editing the manuscript that became Harry Warner’s fanhistory of the 1950s, A Wealth of Fable (SCIFI Press, 1992).  Ron appears in several places in the book, and I had contacted him to clarify something that in the end turned out to be nothing more than a typographical error.  But that got him on the mailing list for Mimosa, the fanzine that I co-edited (with my wife Nicki) that specialized in the preservation of the history of science fiction fandom, which eventually led to our first face-to-face meeting in Glasgow at ‘Intersection’, the 1995 Worldcon.

By then I had learned a lot more about Ron’s activities in that 1950s Golden Age.  He had published two focal-point fanzines – the newszine Skyrack and also a more general interest fanzine, PLOY, which lived up to the name by beginning its run with issue #2 to make readers believe they had missed the first one (there was even a letters column with comments from a few friends in the know, who heaped praise on the fictional first issue).  He was also described as a key player in the unraveling of one of the greatest hoaxes ever perpetrated in science fiction fandom – the celebrated Joan W. Carr, who was ultra-active in British fandom for about four years during the mid-1950s but didn’t actually exist. 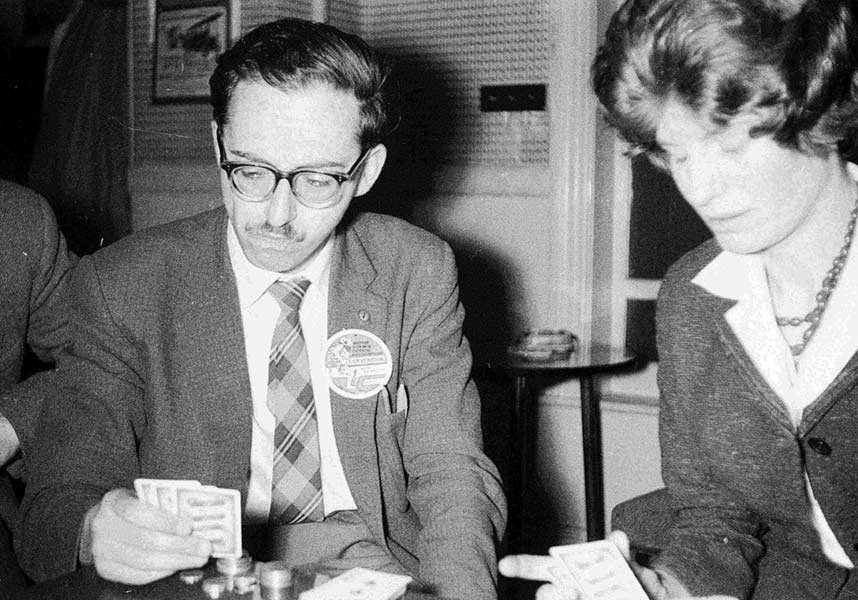 Ron himself was also ultra-active in British fandom during the 1950s and into the 1960s, and his fanac diminished only after temporarily relocating to Singapore in 1967 for employment as a teacher of the children of British army personnel stationed there.  By the time I finally met Ron, in the Dealers Room at Intersection, I had become familiar enough with his personal fanhistory that when we were chatting about the circumstances surrounding his move to Singapore, he was so impressed by the breadth of my knowledge that he asked me in jest if I also knew the airline and flight number he had booked!

It was two years later that Ron started contributing what became a series of nine entertaining and illuminating articles for Mimosa, the first being an account of his time in Singapore and how (in that era of the Cold War) he once had to ward off the overtures from a Russian spy.  Following that, Ron wrote short, amusing, anecdotal histories of PLOY and Skyrack, and also a thoughtful and warm remembrance of another of British fandom’s most prominent members, Vin¢ Clarke.  But it was Ron’s article about the four Kettering Eastercons of the mid-1950s that provided more information about the “Joan Carr” hoax and in doing so contradicted the general belief that he had been the person who had outed the hoax – it was true that he had been inadvertently tipped off by another fan who was in on the ruse, but that had been the entire extent of his involvement. 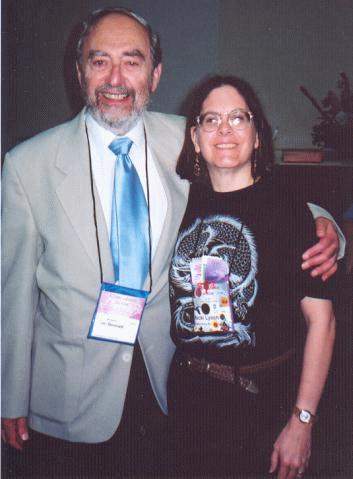 Ron’s last article for Mimosa, which appeared in the final issue of the run, described the first Worldcon that he ever attended, the fabulous 1957 Loncon.  This was the first time a Worldcon had been held in Europe, and with its compact size (which allowed everybody to meet everybody else) and unprecedented international nature, arguably it was the most important science fiction convention that has ever been staged.  Ron attended several other Worldcons, including the very next one in California where he was the Trans Atlantic Fan Fund delegate, but the only other time where we crossed paths at a Worldcon was in 2002 at San Jose.  It was totally unexpected and happened on the very last day of the convention.  He was in the States to visit his son, who was editing a Silicon Valley-based computer trade journal of some kind, and just showed up unannounced.  The only reason Nicki and I found him at all was because of a chance remark I overheard from someone who’d sold him a book in the Dealers Room.

That was the last time I ever saw him.  I had thought we’d meet again at the 2005 Worldcon in Glasgow, and had even requested a program item from the convention committee where I could interview him to see what other bits of knowledge we could glean about the 1950s and 1960s.  But for whatever reason, Ron didn’t attend and with a travel schedule that had been “carved in stone” I really couldn’t go and seek him out.  But if I’d known he only had a bit more than a year left, I would have tried a lot harder.

With all of his years of fan activity and involvement in the storied events of decades past, I’d always thought that Ron Bennett would have been an ideal candidate for a Worldcon Guest of Honor.  I do believe it would eventually have happened, but time ran out on him.  All of what’s left are the memories and recollections from people who had been fortunate enough to have known him.  These have been some of mine.