Fresh from chasing the IRS’ Captain Kirk into retirement, Sen. Chuck Grassley turned his all-seeing eye on some NASA Vikings. An anonymous “concerned citizen” had sent the Iowa senator the link to a set of photos on Ved Chirayath’s website that showed a NASA manager posing with the Vikings of Bjornstad.

Photographer Chirayath thought it would be cool publicity for NASA Ames Research Center to shoot some of the staff in Viking costume – symbolic of their leading the “charge in small satellite innovation and development while evoking the Viking spirit of exploration and adventure.” NASA Ames Center Director Dr. Simon P. Worden participated, as did members of a Viking re-enactment group.

Grassley asked a lot of questions about the Viking photos. Were the people on the clock when they were doing this? Was there any taxpayer money involved?

He contacted NASA Administrator Charles Bolden for an explanation. “I am concerned that in NASA’s case, federal tax dollars may still be spent on non-mission critical activities,” he wrote.

A NASA spokesman responded, “This was not an official NASA activity. No taxpayer funds were used, and the employees involved did not do this on work time.”

Chirayath exacted a little payback when interviewed by NPR by speculating that the government’s investigation of his innocent cosplay cost as much as $600,000 worth of employee time. “That’s far more than the cost of a professional photo shoot, even if NASA had paid for it,” he said. 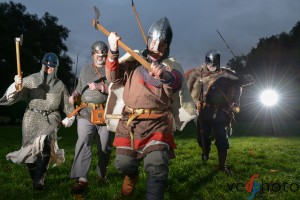