Taral Wayne sent along a few snapshots from SFContario 2. Click on the thumbnails for full-sized pictures. Here are his captions: 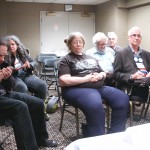 (2) The other members of the panel. Andy Porter (R) showing 1960s photo of Mike at some east coast con. I was sitting left of Andy. 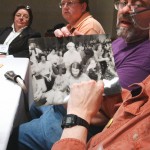 (3) Other members of panel — photo taken by Colin Hinz for me. (L to R), Yvonne Penney, Lloyd Penney, David Warren, Andy Porter. Colin took another shot that cut Yvonne out but included me. Unfortunately, Colin moved and the photo was badly blurred. 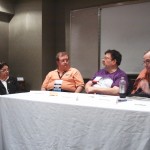 (4) Registration area just after Glicksohn panel. Facing the camera, (L to R), is Eugene Heller and Rene Walling. The “crowd” you see quickly broke up. Registration is long closed, but an unknown staff member is taking a seat There is an enclosed walkway between buildings in the immediate rear. It connects registration as well as a L/R oriented hallway to the part of the hotel where the ball room, and dealers area were. 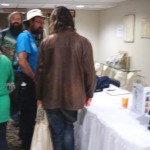 (5) Hallway in front of registration area. A set of spiral stairs to the left leads down to the lobby. An elevator off camera also to the left takes people to the 3rd. floor con suite. At the back of this arm of the hall are two panel rooms. The Glicksohn panel was in the left hand one. That’s the Penneys… um… possibly counting their pennies. 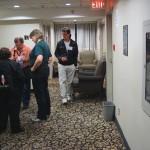 (6) The spiral stairs in front of the registration area. Neil Jamieson Williams L, Diane Lacey (staff) center, CUFF winner Kent Pollard R. Although this is staged, Kent actually did take Neil’s photo in just this situation only seconds before. 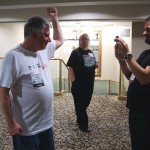 (7) Diane got out of the view of the camera so I could take a second shot. 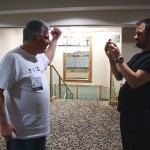