Here are 6 developments of interest to fans. 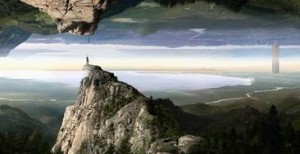 (1) Upside Down, judging by Peter Sobczynski’s review, does little more than inspire puns about a “willing suspension” of disbelief:

By all rational standards, “Upside Down” is one of the dumbest movies that you will see in your entire life. Right from the start, it takes its first giant misstep with a prologue that is meant to simultaneously set up the story and explain the physics of the twin world gimmick in ways that will more or less satisfy the average moviegoer or at the very least keep them from asking pesky questions about the apparent lack of orbits or how the twinned worlds can have sunrises, sunsets and the like.

(2) Everybody knows a digital text doesn’t cost as much to produce as a physical book, consequently people don’t want to pay for an ebook what what they’d pay for the print edition.

Forbes analyzed customer resistance to higher ebook prices and found people will even compare a used paperback version sold by a third party to the ebook when making a decision to purchase. (I certainly do!)

The magazine also learned consumers hate paying more than $9.99 for an ebook.

(3) Amazon.com, which knows a lot more than Forbes about getting people to pay for books but tells a lot less, came under fire for applying to be assigned high profile internet domain names like .book and .app. The Internet Corporation for Assigned Names and Numbers (ICANN) will be handing them out and asked thousands of companies, individuals and agencies for input. The Daily Mail reports authors groups fear the outcome if Amazon receives control:

Scott Turow, president of the US-based Authors Guild, wrote in a letter to ICANN: ‘Placing such generic domains in private hands is plainly anticompetitive. ‘The potential for abuse seems limitless.’

He added that if Amazon gets what it wants then it would ‘move a few inches closer to a monopoly in the book business’ and give it an ‘enormous competitive advantage’.

(3) Robert J. Sawyer’s hardboiled detective novel Red Planet Blues arrives in hardcover on March 26 from Penguin in Canada and Ace in the US. It’s the twenty-second novel of his career. Read the opening chapters here. Listen to Sawyer being interviewed about the novel by SETI Institute astronomer Seth Shostak here [MP3 audio, 8 minutes].

Sawyer’s tour to promote the novel brings him to Los Angeles on April 16. Catch him at Mysterious Galaxy (2810 Artesia Blvd., Redondo Beach) starting at 7:30 p.m.

(4) The Wall Street Journal’s article about “useless machines”  that only exist to turn themselves off credits Marvin Minsky for inventing them. Arthur C. Clarke said they were “sinister.” Famous Monsters had a version with a creepy hand emerging from the box to turn the machine off.

The brains behind the original machine is Marvin Minsky, a professor emeritus at the Massachusetts Institute of Technology. Back in 1952 as a graduate student, he spent a summer at Bell Labs, the intellectual hive known for cranking out Nobel laureates.

Mr. Minsky’s job there was nebulous, he says today. “I got there and a manager said, ‘Don’t work on anything that will take less than 30 years—we like to take a long view.’ ”

Parsons may play a genius, but he’s having a tough time getting his head around the show’s current success.

“There’s something impossible to fathom about viewers and numbers and things like that,” Parsons explained. “I can barely picture 20 people in one room. If you want to say 17 or 18 million, well you’ve lost me.”

(6) When people have a lot of time on their hands they can put together things like the Periodic Table of Comic Books that identifies references to the elements in comics and shows the pages where they were made. Hafnium, anybody?

[Thanks for these links goes out to John Mansfield, Martin Morse Wooster and John King Tarpinian.]