Here are 14 developments of interest to fans —

(1) Yet another list of great science fiction books for people who don’t read sf. I’m never sure why bloggers believe they can slip books past someone’s guard which have cover art that just screams “sci-fi!” With a spaceship and alien on their respective jackets, Ender’s Game and The Stars My Destination, classics though they may be, will fool no one.

A couple of these authors have even helped out by vehemently denying they write sf, while the ethereal talkiness of the novel Frankenstein removes it a safe distance from any accusation of being entertaining.

(2) Who needs Klout? What’s really important is your Scalzi number.

(3) Jay Caspian Kang’s “Divawatch” for Grantland slays me. And I have no doubt Jennifer Holliday would like to slay him for calling out “…her wig that looked like it was made of Ewok…” What a hilarious comment. 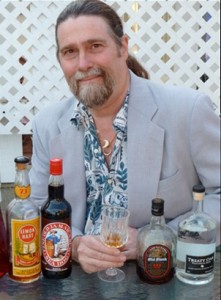 The 28-volume “Edible Series” food history books from British publisher Reaktion and the University of Chicago Press launched in 2008 with three clothbound “global histories”: “Pizza,” “Pancake,” and “Hamburger.” The publisher has produced another half dozen titles each year since. The latest in this curtly titled series were released this month: “Gin,” “Rum,” “Vodka,” and “Herbs.”…

If the format sounds formulaic, rest assured that the writing is often inspired. The author of “Rum,” Richard Foss, is a Los Angeles-based science fiction writer and restaurant critic who originally lobbied the series editor to accept a book on pickles. Urbane, wry, and unafraid to editorialize, Foss brings us the intrigues of the colonial Caribbean, the molasses rotguts of Massachusetts, cachaça rebellion in Brazil, and Hawaiian tiki drinks.

Foss’ website Rum History has extra material that didn’t make it into the book, and a blog that takes questions from readers.

(5) Rum would be something that comes in a bottle college students typically want to drain to the last drop. Not at MIT. Students there have been trying to solve the problem of getting all the ketchup out of a bottle:

The secret is in a futuristic substance known as “LiquiGlide,” a non-toxic, FDA-approved coating that can be applied to the interior of bottles. According to MIT PhD candidate Dave Smith, it’s “kind of a structured liquid — it’s rigid like a solid, but it’s lubricated like a liquid.” Regardless of what the bottle is constructed of, liquid or plastic, ketchup will flow out of it nearly effortlessly.

But why would ketchup company executives want this problem solved? The sooner you run out, the sooner you’ll buy another bottle of ketchup.

(6) D. Jean Collins interviewed Dave Nee about the Other Change of Hobbit for the Oakland Local.

Q:  As new readers join the science fiction community, what are some of the themes and phases you’ve seen?

A: There have been a lot of phases; there was the unicorn phase, the vampire phase, the zombie phase. Epic fantasies were huge after the ‘Lord of the Rings.’ There was Terry Brooks with his Shannara books, Andre Norton and her Witch World series, Stephen Donaldson, Katherine Kurtz. After the Harry Potter epic began, we added a children’s section and expanded the young adult section. There is cyber punk and alternative lifestyles. There is a whole, paranormal romance phase that’s been going on for the last three or four years.  It kind of overtook our shelves.

Some people have complained that they come in and can’t find the latest books in the series with covers showing the big studly guy with no shirt and the buxom woman with the big weapon. The heroes are psychic and they’re fighting vampires, werewolves, witches and aliens. But there’s different fiction for different people. Some of these books are quite excellent.

(7) The Onion nails it — ‘Game Of Thrones’ Running Out Of Unkempt Old Men To Cast.

Do you see parallels between terraforming planets and the intentional self-evolution of humanity?

Yes, it seems clear to me that we are going to be changing both ourselves and our environment—we always have, and now we have to if we’re going to survive. Advances in biotechnology are more potentially transformative of human nature than living in space, and they’re already happening, and they’ll be getting more and more powerful. At the same time, we are already “terraforming Earth” and will have to think about that, and even plan it, in a catchup effort to keep from crashing our biosphere. So in describing human civilization 300 years from now, I felt it was necessary to show how shocking all these changes are when considered together: bodies, habits, institutions, the Earth, the planets and moons of our solar system, all of them altered by design and by accident.

Nobody in the local group wanted to be Speaker-to-Animals, Bilbo Baggins or even C3PO…

By Taral Wayne, in “Toronto the Not-So-Good, One Vice Leads to Another,” The Great White Zine (at eFanzines.com).

(10) Cheryl’s Morgan’s lyrical and informative Åcon report is well worth a fan’s time.

(11) An autograph-seeking fan imposed on Jerry Pournelle and after the experience he wrote:

“Fair warning. I don’t mind signing books, and I don’t mind putting them into the return package, but I am not going to be copying the addresses onto labels and repairing the container the books came in. Not again.”

To Jerry, who may not hear again from the person who stuck him with this task, thanks on behalf of his fans for going above and beyond. We’re glad you still do autographing.

Not everybody has been willing to put up with this. Mr. Heinlein seems to have been plagued by comparable problems, and given up the idea altogether. As it says in his old form letter —

(  ) Don’t send books to be autographed; too many have failed to reach me. Registering or insuring is no answer; the post office is a 30-mile round trip.

(12) L. Ron Hubbard, as everyone knows, started out as a pulp magazine writer. Ever wonder what he might have sounded like while entertaining a convention audience? How well he told a story?

The Heinleins liked to hang out with him, according to Patterson’s biography. The first Westercon committee sure hoped he’d appear. (The LASFS archivist once read his answer to a club meeting). Here’s the chance to satisfy your curiosity — listen to Hubbard telling anecdotes about training Navy ensigns in World War II in this video linked at the Village Voice.

(13) In 1982, publicists showed the Bladerunner Convention Reel at horror, fantasy and sf cons around the country. It’s now come back as a YouTube video, featuring interviews with Ridley Scott, Syd Mead and Douglas Trumbull.

(14) Tara Ariano’s Grantland article “G.I. Joe: Retaliantion: Why Was It Really Delayed?” not only breaks the record for full-stop punctuation in a single title, it comes as close as anyone ever has to giving a damn about this film franchise:

Paramount’s move may be defensible from a business standpoint, but none of that mitigates the emotional toll it has taken on me. Do I care whether I see more of the charisma vacuum that is Channing Tatum? Not really. I want to see Bruce Willis pop out of a car trunk and start WASTING DUDES LIKE WHOOOOOOOOOA! The studio better hope that my blood lust holds steady for the next 10 months.

[Thanks for these links goes out to Ansible, Francis Hamit, Paula Lieberman and Andrew Porter.]