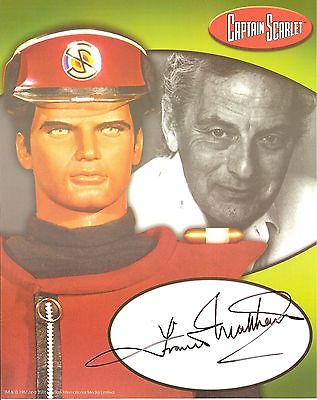 By James H. Burns: Captain Scarlet looks out to me across time and space.

…In my home office, I have a Scarlet figurine, perched somewhere near Captain Action, Alvin, and a Babe Ruth baseball card….

But in the Autumn of 1968, I’d rush home from first grade, to catch Captain Scarlet,  the astonishing science fiction-adventure Supermarionation (marionettes) series from Great Britain’s Gerry and Sylvia Anderson (Fireball XL5, Thunderbirds). As I wrote about in “My Heart Is Like A Fireball”.

I bounded along the dunes of Mars, and the plains of Luna with an exhilaration I still long for, in an era when I thought all these spectacles would be but a prelude to our actually being there.

And I can still hear actor Francis Matthews, talking like CARY GRANT, as the superbly steadfast hero.

Matthews has passed away at the age of 86.

He also appeared in Revenge of Frankenstein, Dracula: Prince of Darkness, Corridors of Blood, The Hellfire Club and Rasputin: The Mad Monk. Beginning in 1969, he also starred in over fifty episodes of Paul Temple, as Francis Durbridge’s crime writer turned private eye, and guest-starred in such shows as The Avengers, and Morecambe and Wise.

From a British commercial for Kellogg’s cereal: