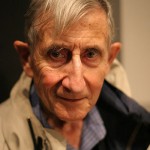 Freeman Dyson has been a household name in Los Angeles sf fandom since he provided the inspiration for Larry Niven’s Ringworld, but that represents only a narrow slice of his life’s work. Dyson, born in England in 1923, began his career as a mathematician before turning to physics in the 1940s. His papers on the foundations of quantum electrodynamics have had a lasting influence on many branches of modern physics. He went on to work in condensed-matter physics, statistical mechanics, nuclear engineering, climate studies, astrophysics and biology. He even received the Templeton Prize for Progress in Religion (2000).

Standing at the lectern, Dyson appeared a coil of energy with mischievous eyes.

“Saving society through engineering – I’ve always believed in that,” he said to someone aside. Then he launched into his presentation, rapid-firing ideas at a rate that hardly slowed for the next 45 minutes.

Dyson proclaimed we are now at the beginning of a revolution in space technology, when for the first time cheapness will be mandatory. “This is bad news for something that requires the investment of the Apollo Program. It is good news for people who will develop these technologies…. Cheapness now has a chance.”

Cheap manned missions will require new biotechnology, to survive after we get there. (“There is no future for humans tramping around in clumsy spacesuits on lifeless landscapes of dust and ice,” says Dyson in his Starship Century article.)

“It turns out scientific data is a lot cheaper than beautiful pictures,” he in a wry tone. “Missions to the planets have been few and far between in the past ten years because they became inordinately expensive. They were expensive because it was easier politically to obtain ten dollars for a space-science mission than to obtain one dollar for astronomy on the ground.”

Once the barrier of high cost is broken, missions will be more frequent and the pace of discovery will be faster. The next missions will explore the planets and asteroids in detail.

Eventually most of the population will be living in the Kuiper Belt where they will utilize light energy captured by mirrors requiring only a few thousand tons of metal and plastic to construct.

We shall not jump in one huge step from planetary to interstellar voyages. There is no reason to believe that the space between stars is empty. The universe probably contains more unattached planets than planets attached to stars. During the evolution of starships unattached planets will be like the islands of Polynesia where travelers can stop and collect fresh supplies.

We will prepare the way for human habitats by establishing robust ecologies in space consisting of many kinds of life. The speed of sequencing genomes is increasing and the costs decreasing. At that rate it may take only 20 years to sequence the genomes of all the species on our planet. So, as we learn more about the conditions in various locations of space, that information can be used to design a biosphere genome tailored to the place it is to be sent.

The first species to emerge from a Noah’s Ark egg will be warm-blooded plants designed to collect energy from sunlight and keep themselves warm in a cold environment. “Plants could be engineered to grow greenhouses the way turtles grow shells” The greenhouse would consist of a thick skin providing thermal insulation, with small windows to admit sunlight. Outside the skin would be an array of simple lenses, focusing sunlight through the windows into the interior. Groups of greenhouses could grow together to form extended habitats for other species of plants and animals. In that way, “We will be the machines getting life to grow all over the universe.”

Dyson speculates there will be “superhighways” in space. Sunlight will be the source of energy powering laser or microwave beams that propel small, light spacecraft. Unlike chemical rockets, these will not be carrying their own fuel. The beams may push against wire mesh sails.

Because voyages to stars will take longer than a human lifetime, we cannot expect humans to travel with them. Ships will carry eggs that grow into humans at destination. In the end we would populate the galaxy by sending the information for growing humans rather than sending human bodies in storage.