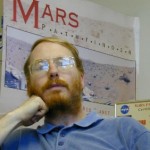 Geoffrey Landis is a scientist at the NASA John Glenn Research Center working on Mars missions and on developing advanced concepts and technology for future space missions — interstellar propulsion, solar power and photovoltaics. Landis, supported by his scientific background, also writes hard sf and is the winner of a Nebula Award, two Hugo Awards – plus two Rhysling Awards for his poetry.

Landis opened by echoing a mantra of earlier speakers — Starflight requires producing and controlling vast levels of energy resources – ice and 3He harvested from the outer Solar System.

“The Moon was easy,” he teased, then said seriously, “It was the hardest technical project ever accomplished.” But the chemical rockets that took us there aren’t good enough for missions to the farther reaches of the Solar System, and certainly not for starflight.

Landis argued that the next thing we need is the spaceship equivalent of a pickup truck capable of hauling cargo for a wide variety of jobs – thus the title of his presentation, “Workhorse of the Solar System – The Nuclear Rocket and Beyond.”

Chemical fuels run up against the “rocket equation,” which dictates that as you go faster, it takes exponentially more fuel.  Missions to the distant reaches of the Solar System really need an energy source that is more energetic per unit of mass like nuclear, or an energy source you don’t have to carry on board (microwave, laser).

He added that ion thrusters have been successful for some missions, but electronic propulsion scales poorly to high thrust, requiring large amounts of power.

NASA tested a NERVA (Nuclear Energy for Rocket Vehicle Applications) NTR engine in the 1960s. All the requirements for a human mission to Mars were demonstrated, but it wasn’t pursued at that time.

Landis extolled the simplicity of nuclear rockets. The nuclear reactor produces heat. If you pass a gas over that heated reactor core, the gas heats up – and you can expand heated gas out a nozzle to produce thrust. A nuclear thermal rocket (NTR) is far simpler than nuclear generators used to generate electricity.

Hydrogen has been used because its atoms are the lightest and move the fastest when heated. But because of its low density large tanks are required to hold hydrogen fuel.

Another advantage of choosing hydrogen is that water is abundant in the outer Solar System. “Water is rocket fuel ore,” he noted. And once you get far from the Sun, “Water is just another type of rock.” So a nuclear rocket could be refueled using hydrogen generated from rocks harvested among the Trojan Asteroids or short period comets.

Landis devoted some time to the limits on NERVA’s efficiency inherent in the high-temperature sensitivity of the materials available to build the rocket. He mentioned several hypothetical ways to get higher temps without melting the reactor, suggesting “it’s an engineering problem,” so may eventually be overcome.

Lastly he outlined a manned mission to Callisto, a moon of Jupiter, that was studied in NASA’s Revolution Concepts for Human Outer Planet Exploration (HOPE). Two reasons for choosing Callisto are that it is believed to have water ice, and is far enough from Jupiter to be subject to only 0.01 rem a day. A surface base might be built there that would produce fuel for further exploration of the Solar System.

These developments are prerequisites to creating the energy economy needed to support interstellar missions.

[Note: Landis acknowledged Stanley Borowski of NASA for some material used in the presentation.