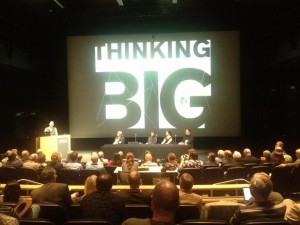 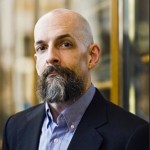 The words “THINKING BIG” covered the screen at the beginning of Neal Stephenson’s segment, where he was joined on stage by four scientists and engineers.

Lately Stephenson has been active in the Hieroglyph, a collaboration with Arizona State University’s Center for Science and the Imagination, working to make it a place where authors and scientists Think Big.

Stephenson told the audience he had made a soapbox speech at a conference about the decline of the space program, then pivoted to the gulf oil spill as a way of indicating the real issue isn’t about space launch. It’s our inability as a society to do big things, to execute big plans. The theory of the Hieroglyph is that good science fiction can help change that. Sf supplies a plausible, fully thought-out picture of an alternate reality in which some sort of compelling innovation has taken place, presented in a way that makes sense to a scientist or engineer, and around which they can organize their work. The ideal subject matter is an innovation that a young, modern-day engineer can make substantial progress on during his or her career.

Stephenson’s contribution is The Tall Tower. Inspired by Geoffrey Landis’ papers on the subject, Stephenson began wondering how tall we could build a structure using mundane materials – things available now, because if you have to develop special new materials then people push you off into the future, saying go play in the sandbox and come back in 15 years.

Stephenson discussed the question with Dr. Keith Hjelmstad, a professor of structural engineering at Arizona State University, and learned it might be possible to build a very large structure using high-grade steel.

Hjelmstad proceeded to take up the story about how the two now envision a 20km tall steel tower able to cope with cold temperatures and 480 mph jetstream winds.

Hjelmstad says what interested him in the project was the need to design from first principles — like back in the days before lawyers dominated the conversation. Lots of geometry of structure. A base covering 11 square miles. Using 430 million tons of steel, a significant portion of the world’s production.

Jenny Hu and Daniel MacDonald followed with a media presentation, “Accessible Tower Model,” exploring the structural requirements of such a tower. One of the recurring challenges is that solutions to recognized engineering problems end up adding weight to the tower. One CAD display footed to 985 million tons of steel and a budget of nearly a trillion dollars

The final presenter, Kevin Finke of the Furlong/Fortnight Bureau, presented the fascinating challenge of wind forces — the drag equation.

The density of the air falls off with altitude, but the velocity of the wind increases with altitude. In the worst case, winds will be greater than 300 mph in the jetstream.

He has considered various solutions. One is mounting airfoils and essentially flying The Tower through the wind. Alternatively, they might counter the drag with the thrust of attached jet engines. Adhering to the vision of using off-the-shelf technology, he calculated that would require about 22,300 of the most powerful jet engines made. Alternatively, Finke looked at the specifications for Pratt & Whitney F-1 engine used by the Saturn V — he would still need 700 of those.

Finke assured listeners they are serious about building the Tall Tower. In any case it is a great thought experiment that allows people to practice visualizing huge projects that will be the necessary forerunners of a starship. If actually built, the tower might facilitate the launching of spacecraft. However, in Stephenson’s story “Atmosphæra Incognita” for Starship Century (click to read an excerpt), by the time the tower is finished it is being used for technologies as yet unimagined or undeveloped when the project was first conceived.

Gregory Benford closed the presentation on a light note saying the Clarke Center is trying to get people to think big again because too many have become limited to ideas the size of their phone.