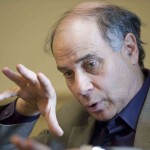 Robert Zubrin is President of Pioneer Astronautics and the founder and President of the Mars Society, and was responsible for developing the Mars Direct mission plan.

With the zeal of a prophet, Zubrin made fiercely anti-Malthusian arguments that the goal of building a starship in the coming century is attainable.

What are the requirements for a starship? He postulates a 1000-ton ship that travels at 10% light speed. What resources will society need for the mission? Zubrin said that to keep the cost from exceeding Apollo levels in proportion to society’s wealth, humanity will need a gross global domestic product (GDP) of 1000 times greater than existed in 1968, or 200 times greater than exists today.

Pounding away at the opposite conclusions reached in Paul Ehrlich’s famous book The Population Bomb, Zubrin said, “If humans destroyed more than they made, the earth would be barren already. The real resource is human creativity.” Every mouth comes with a pair of hands and a brain. If we accept Malthusian advice, and act to reduce the world’s population, we will impoverish the future by denying it the contributions the missing people could have made.

For one thing, the more people, the larger the market, the easier to justify investments. For another, technological progress is cumulative.

Zubrin’s historical graph showed that GDP/per capita has increased with total global population over the years. This is because productivity depends upon technology, which is the cumulative result of human effort. For example, he pointed to the jump in worldwide wealth in the 1500s, something he credited to the development of sailing ships which unified the world and allowed inventions to be disseminated more rapidly than ever before.

Humanity’s escape from poverty depends upon energy use – GDP/per capita is a function of carbon use. Rising levels of energy consumption have correlated directly with rising living standards. Zubrin does not consider that this has been accomplished at the cost of a climate catastrophe. “The weather is about the same as when I was a boy,” he said dismissively.

In the future our energy resources will be (1) The sum of known and unknown Terrestrial fossil fuels, plus (2) local planetary He3.

He speculated that a winged transatmospheric vehicle that can use a gas giant’s atmosphere for propellant, heating it in a nuclear reactor to produce thrust (Nuclear Indigenous Fueled Thermal rockets) could be used to transport He3 from the planet to an orbiting tanker, which would deliver it to Earth orbit.

This would provide fuel for fusion reactors. A fusion configuration could theoretically yield exhaust velocities of 5% the speed of light. The thrust level would be too low for in-system travel, but would make possible voyages to a nearby star with trip times of less than a century.

Zubrin is counting on human wanderlust as the motive for colonizing the nearby planets, and in time the Kuiper Belt and the Oort Cloud. “Why go? Why stay? Why live on a planet whose laws and social possibilities were defined by generations long dead, when you can be a pioneer and help shape a new world according to reason as you see it?” The need to create is fundamental. “Once outward move begins, it will not stop,” Zubrin promised, “We can make it to the stars provided we remain free.”

A question session followed which might have veered onto unpacking the speaker’s data and endlessly processing his analysis, except that Zubrin, with a verbal flourish, used the first question to point to the fuller support in his book Merchants of Despair: Radical Environmentalists, Criminal Pseudo-Scientists, and the Fatal Cult of Antihumanism (2011) – a bit of verbal judo that gained applause from the many authors in the audience. Remember: Always Be Closing…