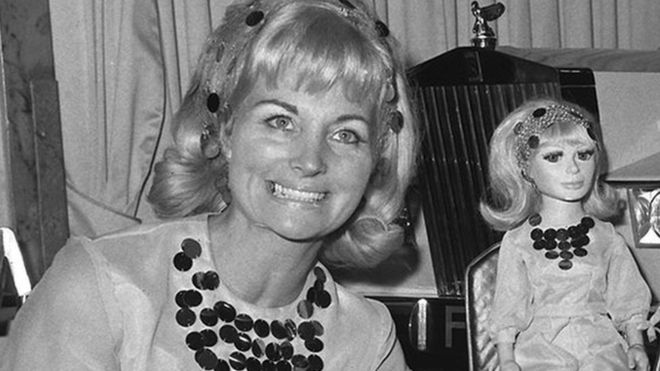 British television and film producer, writer and voice actress Sylvia Anderson passed away March 16 after a short illness. She was known for co-creating numerous television series with Gerry Anderson, her husband between 1960 and 1981. (He died in 2012.)

Many of these series, such as Thunderbirds, featured marionettes as actors. The BBC obituary explains:

They developed a production technique using electronic marionette puppets, called Supermarionation, in which the voices were recorded first, and when the puppets were filmed, the electric signal from the taped dialogue was hooked up to sensors in the puppets’ heads.

That made the puppets’ lips move perfectly in time with the soundtrack.

In 1963, the couple came up with the idea for Thunderbirds, which told the story of the Tracy family who form a secret organisation dedicated to saving human life, set in the future.

As well as co-creating and writing the series, Anderson worked on character development and costume design.

The Thunderbirds character Lady Penelope, a glamorous agent, was modelled on Anderson’s own appearance, and she also voiced the character.

She returned to voice Lady Penelope in a 1994 episode of the sitcom Absolutely Fabulous. And when a new Thunderbirds Are Go series was produced in 2015, she was cast as the voice of Lady Penelope’s elderly Great Aunt Sylvia.