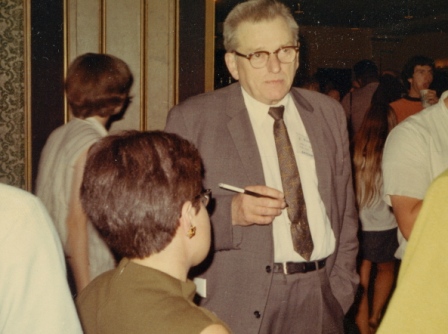 Editor of Astounding/Analog Science Fiction from 1937 until his death in 1971, John W. Campbell, Jr. is among those credited with bringing about the Golden Age of Science Fiction of the 1940s.

He courted controversy and is still embroiled in it to this day, thanks to the latest Robert A. Heinlein biographies reminding fans about the Dean of Science Fiction’s tense relationship with his early patron, and how his unhappiness with Campbell’s editing and voluminous feedback made him quit submitting stories to Astounding altogether.

Yet other writers found it possible to both quarrel with and adore the man. Harry Harrison was an unabashed liberal. In these polarized times his virtual father-son relationship with Campbell is almost unfathomable given their irreconcilable political views. Yet it was Harrison who edited John W. Campbell: Collected Editorials from Analog, two volumes of The Astounding-Analog Reader, and The John W. Campbell Memorial Anthology.

Harrison responded quite differently from Heinlein to Campbell’s overwhelming editorial personality. As he told an interviewer in 1997 –

I was the very opposite of him politically in every way but he never dictated, It was easy to sell him a series, hard to sell him a short story. If he didn’t like a short story, he threw it out. But a serial, novel length thing, he knew what it was going to be like from the very beginning. And if he did not like it, he didn’t put it in. But he would allow you the freedom to do whatever you want. He might argue with you, but he wouldn’t correct you….

I worked with him, in a sense collaborated with him. When I gave him an outline for Deathworld, my first novel, he wrote me a five page letter of  [pause] not telling me what to do but expatiating on my ideas. You didn’t have to follow him. He never told you to, “do this.” In a sense, all my novels, the first five or six, are a sort of collaboration with John….

There was a lot of give and take. Poul Anderson once said that having lunch with John Campbell was like throwing man-hole covers at each other, you know KLANG, CRASH, BANG.

There are innumerable legends about Campbell. The best-known is that in 1944 Cleve Cartmill’s atomic bomb story “Deadline” resulted in a visit by a War Department investigator to Astounding’s editor. Few remember that Cartmill’s story was actually the culmination of Campbell’s long flirtation with atomic weapons in the pages of his magazine.

Another Campbell legend was instigated by a letter Richard A. Hoen sent to Astounding in 1948. Hoen, in a famous bout of wishful thinking, purported to review ahead of time a 1949 issue of Astounding Science Fiction with stories by Don A. Stuart (Campbell’s pen-name), Anson MacDonald (Heinlein’s pen-name), Lester Del Rey, A. E. Van Vogt, L. Sprague DeCamp and Theodore Sturgeon, and fact articles by Willy Ley and astronomer R. S. Richardson.

Campbell ran Hoen’s letter in the November 1948 issue of Astounding and laughed it off, saying “Hm-m-m — he must be off on another time-track.” But his reaction behind the scenes was something else entirely. He went to work contacting the writers and acquired all the stories required to fulfill Hoen’s prophecy in the following November’s issue. (See full details in Andrew May’s analysis of the issue, “Science Fiction Prophecy.”.) Even Heinlein, who had stopped sending stories to Campbell, cooperated in fulfilling the vision.

[Thanks to John King Tarpinian for the suggestion.]