The blogosphere is a voracious marketplace for the latest outrages. Sometimes when kerfuffles are in short supply, we all have to make do.

Did you know today is the first time in 50 years there isn’t a single network airing a block of Saturday morning cartoons? Gizmodo announced the tragic state of affairs:

Yes, The CW, the final holdout in Saturday morning animation, ran its last batch of Vortexx cartoons last weekend. This week, where you once saw shows like Cubix, Sonic X, Dragon Ball Z and Kai, Digimon Fusion, and Yu-Gi-Oh!, you’ll instead find “One Magnificent Morning,” a block of live-action educational programming.

It’s the end of an era, but it’s been a long time coming: NBC ditched Saturday morning cartoons in 1992, CBS followed suit not long after, and ABC lost its animated weekend mornings in 2004. The CW, a lower-tier broadcast network, was the last holdout in a game that the Big 3 left long ago. 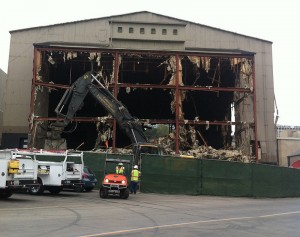 There may be a bit more reason to be annoyed by the relevation that Universal Studios went ahead and tore down Stage 28 anyway despite the protests. Constructed in 1924 for Phantom of the Opera with Lon Chaney Sr., its wall panels recreating the auditorium of the Paris Opera House had remained in place for 90 years — but no longer.

September 20th 2014: This stage has now been demolished. The Opera House facades have been put into storage, and the rest of the stage has been completely demolished.

We understand this is to make way for an expansion of the theme park. It’s a shame that despite Universal proudly announcing that Stage 28 is historic and one of the first stages built on the lot, containing the iconic opera house sets from the 1925 Phantom of the Opera, the expansion of the theme park has destroyed the chance for future VIP Tour visitors and movie crews the thrill of visiting or working in such an atmospheric location. It was a stage that was in almost constant use, although there are bigger (and more soundproof) stages all over the lot.

Or you may just decide to give your adrenal glands the day off. As Scarlett O’Hara memorably said, “Tomorrow is another day!” On Sunday there might be something really worth getting cranky about.

10 thoughts on “Today’s Things To Get Upset About”