Mark Showalter, senior research scientist at the SETI Institute’s Carl Sagan Center, found two more moons of Pluto using the Hubble telescope — P4 in 2011 and P5 in 2012. Ordinarily his ideas for naming them would carry great weight with the International Astronomical Union (IAU). Instead, he’s decided to be a sport and open the selection to a popular vote on the internet.

But don’t get carried away. The names for the moons of Pluto must come from Greek or Roman mythology and be related to Pluto/Hades and the underworld. Although there’s a write-in option it will do you no good to fill that space with the name of a Kardashian sister or a disliked political commentator.

The voting tally is updated once an hour and at this writing Styx and Cerberus are way out in front.

People are asked not to vote more than once per day. Voting ends at 12 noon (EST) on Monday, February 25. 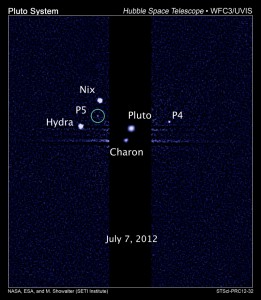 8 thoughts on “Vote for Your Favorite Minion of Hades”