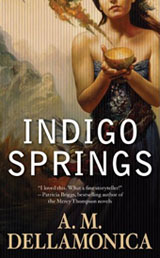 Winners of the 2010 Sunburst Award for Canadian Literature of the Fantastic have been selected. The adult award went to Indigo Springs by A. M. Dellamonica. The young adult award winner was Half World by Hiromi Goto.

Winners of the award named after a novel by Canadian author Phyllis Gotlieb (1926-2009), receive $1,000 and a medallion bearing the Sunburst logo, designed by Marcel Gagné. 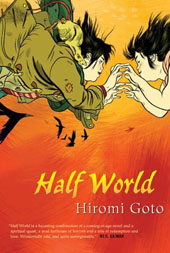 The Sunburst Award for Canadian Literature of the Fantastic is a prized and juried award presented annually. It is based on excellence of writing and awarded to a Canadian writer who has published a speculative fiction novel or book-length collection any time during the previous calendar year. Named after the novel by Phyllis Gotlieb (1926-2009), one of the first published authors of contemporary Canadian speculative fiction, the award consists of a cash prize of $1,000 and a hand-crafted medallion which incorporates a “Sunburst” logo, designed by Marcel Gagné.

The Sunburst jury said: “When Astrid returns to the town of Indigo Springs and to the house she has inherited from her father, accompanied by Sahara, the girlfriend she has a crush on, and Jake, her platonic buddy who has a crush on her, she finds that, far from being the dissipated drunk the town thought him, her father was a crafter of magical objects called ‘chantments,’ using the power of the mysterious spring of blue waters beneath the house. When Astrid and Sahara learn to use the power for themselves, they discover the magic is both addictive and transformative. As their power grows, their experiments escalate into an ecological crisis … and open an unbridgeable chasm between them.

“Original, passionate, lyrical and powerful, entertaining and terrifying at once, Dellamonica’s debut novel examines how both good intentions and good people can be overthrown by the temptations of power.”

About Half World, the Sunburst Jury said: “After her mother suddenly disappears, unpopular oddball Melanie Tamaki accidentally discovers that she is a refugee from Half World, a Boschian third dimension between the worlds of Spirit and Flesh where dead people work out their karmic issues through chaos and entropy. Beyond the hypnagogic wonders of the Half World setting and the clever yet unobtrusive cosmology of its concept, this is a mother-daughter story, a fact which of itself sets the novel apart, for few such are written. Most YA novels focus on peer relationships; Half World does too, but Melanie’s best friend is a shape-shifting jade rat pendant.

“Goto’s style is gruesome rather than gory; neither horror nor dark fantasy but entirely original and unclassifiable. Richly imagined phantasmagoric scenes decorate every iridescent page. Goto’s stylish incendiary prose lifts Half World above the YA category; this novel crosses age boundaries and could just as easily be categorized as a book for adults.”

The jurors for the 2010 award were Don Bassingthwaite, Gemma Files, Susie Moloney, Ursula Pflug and Edward Willett. They selected five adult and five young adult shortlisted works as representing the finest of Canadian fantastic literature published during the 2009 calendar year.

The other shortlisted works for the 2010 adult award were:

The other shortlisted works for the 2010 young adult award were:

For additional information about the Sunburst Award, the nominees and jurors, as well as previous awards, eligibility and the selection process, please visit the website at www.sunburstaward.org.