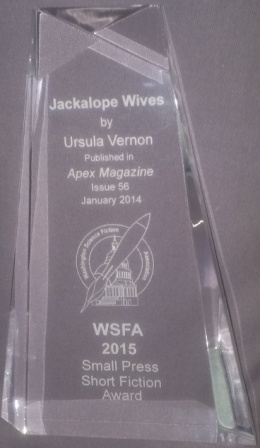 “Jackalope Wives” by Ursula Vernon, published in Apex Magazine # 56 (January 2014) is the winner of the 2015 WSFA Small press Award sponsored by the Washington Science Fiction Association.

The award was presented by last year’s winner, Alex Shvartsman, at a ceremony during the Capclave 2015 in Gaithersburg Maryland.

Paul Haggerty, chair of the WSFA Small Press Award committee, accepted the award on behalf of Ursula Vernon and delivered her acceptance speech —

Thank you all. I’m very honored to have been nominated, and to have my story standing shoulder-to-shoulder with such amazing work.

I would like to thank the WSFA for supporting small presses this way. Large chunks of my career have been built on the back of small presses, and without their hard work, I wouldn’t have had anywhere for my stories to go. Apex Magazine, who published Jackalope Wives, was not just the publisher. Sigrid Ellis, the editor at the time, actually commissioned the story, at a time when I didn’t think of myself as being able to write short stories–I thought I was writing weird little fictional blog posts with a beginning, middle and end, and it was Sigrid who said “That’s a short story and you will write me one!” It seems to have worked out well. I would also like to thank Jason Sizemore, the current editor of Apex, who has worked so tirelessly to promote my work, and the various other editors who had followed Sigrid’s lead over the last year or two and grabbed me by the collar and said “You will write us a thing!” This is a very haphazard way to run a career, and without the amazing people running small presses, it would not work at all.

There are a bunch of other people I could thank and who will probably silently judge me for not having thanked them, but I am currently on book tour, so my brain is not what it was a week ago. I wish I could be there in person to accept. Believe me. I am currently talking to auditoriums full of third-graders, usually two or three hundred at a time, so I REALLY wish I was there to accept in person.

The WSFA Small Press Award honors the efforts of small press publishers in providing a critical venue for short fiction in the area of speculative fiction. The award showcases the best original short fiction published by small presses in the previous year. Members of the Washington Science Fiction Association select the winner. All voting is done with the identity of the author (and publisher) hidden so that the final choice is based solely on the quality of the story.