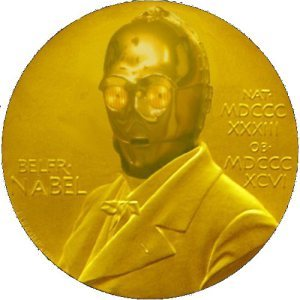 By Hampus Eckerman: And the  Swedish Nåbel Prize this year goes to Anne Rice.

The Nåbel Prize is awarded each year to a writer who “in the literature has produced the most outstanding work in the fantastic direction”.

The prize was established by the famous inventor and explorer Belfred Z Nåbel before he disappeared in an as yet unexplained incident in his laboratory (or possibly during his last expedition towards a secret goal), and was awarded for the first time in the year in 1898.

The motivation from the Nåbel committee goes:

“For a very varied authorship which has managed to portray both the epic and the emotional and sensual, and that has had an undeniable influence on the fantastic, mythology in general and vampirism in particular.”

The Nåbel Prize is handed out by the Science Fiction bookstore in Malmö each year.