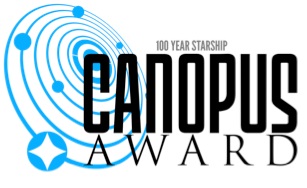 100 Year Starship has named the finalists in the 2016-17 Canopus Award for Excellence in Interstellar Writing. The Canopus Award is an annual writing prize that recognizes “the finest fiction and non-fiction works that engage broad audiences and enhance the understanding excitement, and knowledge of interstellar space exploration and travel.”

Winners will be announced at the 100YSS Nexus on August 12 in Los Angeles.