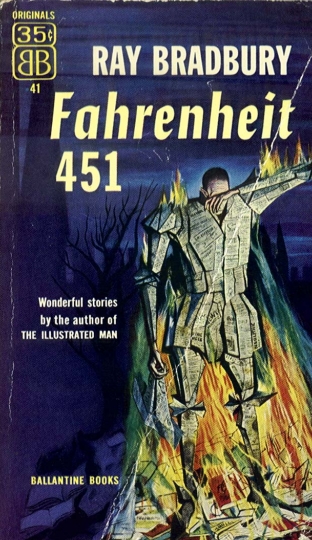 The true first edition is this paperback.

By John King Tarpinian: October 19, 1953. On this day in history one of the most read science fiction novels was published. One of the few, if not only, novels of sci-fi on the majority of middle and high school reading lists.

Fahrenheit 451 is one of three books that as a young man made me think about stuff outside of my comfortable life. The other two were Dalton Trumbo’s Johnny Got His Gun and Robert Heinlein’s Stranger in a Strange Land. The three making up a trio of books that woke up my little brain.

Fahrenheit 451 was made into a movie by the French director, François Truffaut. It was his first movie in color and his only English-language film. Remember the French guy in Close Encounters of the Third Kind?  That was Truffaut.

Bradbury’s book rails against censorship, in any form.

(Use this link to see a parade of Fahrenheit 451 book covers from over the years.)