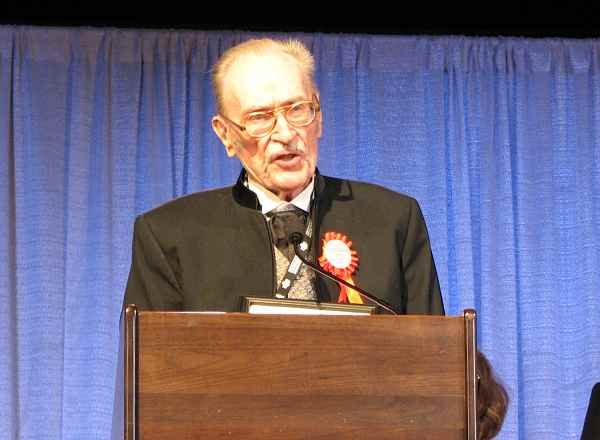 By John Hertz: With the hundredth birthday of Forrest J Ackerman real soon now (24 Nov 16; do you think we’ll manage to celebrate at Loscon XLIII? if you’re in town, come and find out), Karl Lembke suggested we might mark it with the expression 4e = C.

I said (Vanamonde 1221), “Someone proposing 4e (1916-2008) may now be traveling at the speed of light (which may seem paltry to those of us who believe human identity is essentially beyond space and time; he himself was an atheist) would more properly write 4e = c, to which I only answer he was a capital fan (avoiding digression into the work of Leonhard Euler 1707-1783).”

Lee Gold said, “4e = C would be asserting that he had reached 100 … or that he was a fannish Constant (and thus forever worthy of consideration), both perhaps at least as important in our calculations as the speed of light.”

For his 92nd birthday, which proved to be the last he lived to see, I wrote (Vanamonde 809)

Anything’s possible with 4e,
From monsters he loves ’cos they’re horri-
Ble, to distant suns,
And fandom and puns,
To writing the world’s shortest story.

There have been and I hope will continue to be many appreciations of him. Here’s mine (Vanamonde 853):

He seems to have been first inspired by a Frank Paul cover illustrating Hyatt Verrill’s “Beyond the Pole” on the October 1926 Amazing.

He rang Bob Olsen’s Beverly Hills doorbell and got an autograph, and cookies. In the fall of 1929 his first published letter was in Science Wonder Quarterly; from San Francisco, where he then lived, he wrote, “Although I am only twelve years old, I have taken a delight in reading the magazines you have published for almost the last four years. Let’s give Science Wonder Stories a big yell. Hip, hip, hip, hurrayyyyy.”

Years later Olsen said, “In all my experiences with science fiction, I have never read, seen, or known anything that was so amazing as 4e himself.”

Forrest J Ackerman (1916-2008; no period after the J) went on writing to prozines, partly because his parents were more willing to buy issues that had a letter from him, a method which, like Michelangelo’s “I just get a chisel and cut away anything that doesn’t look like a Madonna and Child,” rests on a presupposition.

Linus Hogenmiller of Missouri saw Ackerman’s name in a prozine and struck up a correspondence, the first of thousands Ackerman maintained. By 1930 the two teenagers had started a Boys’ Scientifiction Club, which involved Julius Schwartz and Mort Weisinger, and resulted in The Time Traveller.

Soon came the Science Fiction League. Ackerman was a charter member. It tested members’ knowledge with a questionnaire. Asked who were the nation’s two most active fans, Ackerman replied “Remember our modesty.” This was listed as a correct answer.

A straight-A student in high school, he quit the University of California after a year and got work as a typist. He was a flame for Esperanto and, in English, for endless wordplay: he wrote under the pseudonyms Weaver Wright, Jack Erman, and Claire Voyant, and his own name took many forms, like his spelling and paragraphing, in what became known as Ackermanese.

He was part of the Los Angeles Science Fantasy Society when it began, and its fanzine Imagination and successor Voice of the Imagi-Nation. The LASFS adopted his colors, green and brown. His 1941 business Assorted Services, doing anything for anyone, is said to have been adapted by Heinlein for “We Also Walk Dogs” (1941).

Came the war; inducted in 1942, he moaned he would be inept at Army life, but made sergeant — adding the pseudonym Sgt. Ack-Ack (anti-aircraft guns were “A.A.”, under some phonetic alphabets “ack-ack”) — and editor of his base’s newspaper, which finished second in a contest of 2,000.

He attended the first World Science Fiction Convention (New York, 1939), where he began our costuming tradition by dressing as a Man of the Future based on the 1936 film Things to Come. He was guest of honor at the first international s-f con in London (1951), and was given the first fan Hugo Award (1953).

He coined the nicknames Chicon, Nycon, Pacificon, and the expression sci-fi — which he meant as a compliment, since at the time sound-reproduction technology had just improved to the point of being called high fidelity, or hi-fi. By 2002 his weekly open house, at his home the Ackermansion, had hosted 50,000 visitors.

He was a formidable collector: 300,000 books, Bela Lugosi’s Dracula ring, a meticulous replica of Walter Schultze-Mittendorf’s robot for the 1927 film Metropolis, a hallway of Paul artwork he called the Paulway. In 2001 a 75th-anniversary edition of the Metropolis novelization had an introduction by him. He saw the film a hundred times.

He had cameo appearances in two hundred movies. He more or less fell into Famous Monsters of Filmland, where for twenty years he was editor, writer, chief cook and bottle-washer, and blithe spirit, leading to more pseudonyms, Dr. Acula, the Ackermonster, and probably his widest fame.

Although he was an atheist, he was an angel. He got Bradbury to the first Worldcon, long before professional success, and backed his fanzine, among many others.

He met Walt Willis in Ireland and drove him across America, a punsters’ synergy we fortunately lack a full record of. He hosted Tetsu Yano for six months, visited Japan twice, and was one of only two foreigners to receive the Japanese Fandom Award; Takumi Shibano called him the greatest benefactor linking Japanese and United States fandom.

He and Walt Daugherty founded our highest service award, the Big Heart, Ackerman administering it until the millennium; in 2006 we could finally give it to him. He was at the 3,507th LASFS meeting, as was I but he had been at the first; it was our 70th anniversary; he took the gavel and brought us to order, a hyperbole which may be allowed.

For decades he was the first person any of us met at a science fiction convention. If he was wrong, that may now be true in Heaven. Ave atque vale.