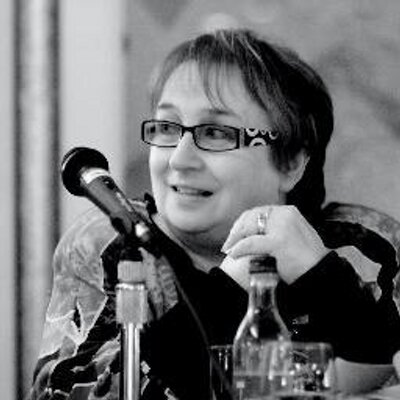 By Carl Slaughter: Nimbus, the final book in Jacey Bedford’s Psi-Tech trilogy came out on October 3, and she’s already at work on the third book in the Rowankind trilogy – this time simply called Rowankind. 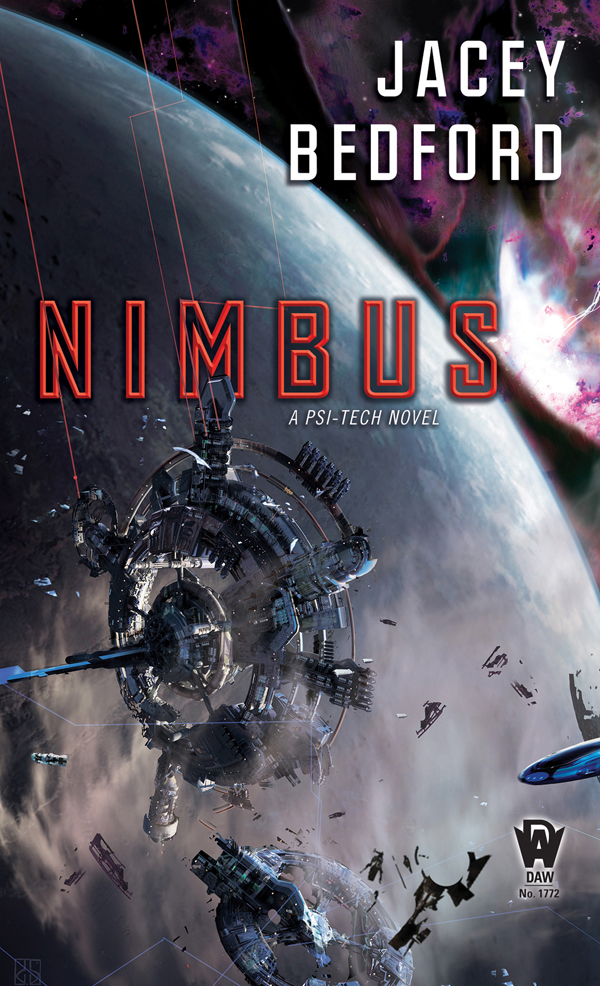 JACEY BEDFORD:  Psi-tech is the broad term for neural implant technology that turns someone with a natural tendency towards psionics into a fully functioning telepath. Along with telepathy come other skills/talents. There are psi-mechs who can mesh mentally with machines. Empaths can sense what people (even non-psi-techs) are feeling, though they can’t ‘read minds’ as such. Navigators have an inbuilt sense of direction and can find their way around (a planet or the whole galaxy) by intuition. Dee-Ells (Doolittles, get it?) can connect with animals and non-humans in both directions, i.e. sense what they’re thinking/feeling and transmit feelings/ideas in return. As you can imagine, without language, it’s not an exact science. Healers (very rare) can manipulate flesh and bone and share life energy. In all these skillsets there are levels. Cara is a top grade telepath and a level three empath. Ben is a top grade Navigator but his telepathy is minimal. He can barely throw a thought as far as his feet. Other characters have different skillsets.

CS:  What’s the context for the science premise?

JB:  We’re five hundred years in the future. Humanity developed jump gates in the 22nd century, which allowed the megacorporations to begin to colonise the galaxy. Platinum is a required catalyst for jump-tech. Unfortunately the technology is flawed. For every jump through foldspace a small, but significant amount of platinum is lost. Though platinum is common, it exists in small hard-to-extract quantities. For example all the platinum refined on earth to the present day would barely cover an Olympic swimming pool to the depth of twelve inches. So to keep the jump gates open, the megacorporations are desperately seeking more and more platinum. It’s the most valuable commodity in the galaxy.

CS:  How does this affect the characters?

JB:  Psi-tech implant technology was developed by the megacorporations. The psi-techs’ special skills make them invaluable ‘commodities’ as far as the megacorps are concerned. On the one hand psi-techs get to fly space ships and do cool jobs in outer space. They are looked after from cradle to grave, and rarely want for anything except freedom. They are buried in contracts so dense that the only way to get away from the megacorp that paid for their implant and training is to die or to run. (And even running is dangerous when your bosses can find you mind-to-mind.) There are rumours of a place called Sanctuary where runaway psi-techs can find help, but at the time the trilogy opens, Sanctuary has been broken by the megacorporations. 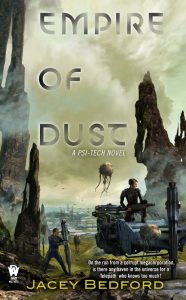 CS:  Bring us up to speed on the story before Nimbus.

JB:  Empire of Dust. Cara is on the run from Alphacorp and a particularly shady boss (and ex-lover) when she hooks up with Ben who works for the Trust taking a team of psi-techs to set up new colonies and babysit them for their first year. Ben, Cara and a team of psi-techs take a party of colonists to Olyanda, but things get complicated when they discover large reserves of platinum. Both the Trust and Alphacorp are after the platinum and suddenly the colonists are surplus to requirements. 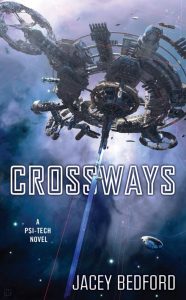 Crossways. Ben, Cara and the psi-techs have taken refuge on Crossways, an independent space station populated by crooks, free-thinkers, subversives, renegades and runaways. Mother Ramona and Norton Garrick, two of the biggest crimelords on the station, would like to legitimise Crossways. They helped Cara and Ben when they most needed it and have proved to be far more reliable friends than the megacorporations. Ben and Cara have promised to find an ark carrying 30,000 cryo-frozen settlers which was abandoned by the bad guys in the first book, but suddenly the hunt for survivors turns into a battle for survival when the combined megacorps decide to take out Crossways and invade Olyanda for its platinum reserves.

Nimbus picks up the story after the battle. The psi-techs are helping to repair and restore Crossways and Cara is searching for what remains of Sanctuary. The megacorporations aren’t going to try another frontal attack, at least not yet, but they still want to get their hands on Olyanda’s platinum. However, that might all prove to be minor compared to a new threat. In the last book Ben discovered void dragons living in foldspace. This led to a confrontation with an entity they’ve named the Nimbus. Ships are disappearing during transit. Is the Nimbus behind the disappearances? Does it have a plan?

CS:  How have the characters in the story evolved?

JB:  Cara, in particular, has to learn to get over her trust issues. She’s very fragile and vulnerable at the beginning of Empire, but then discovers that she’s not going crazy, Alphacorp really is out to get her. Ben learns almost exactly the opposite when someone he trusts turns out to be on the wrong side, for all the right reasons. Both Cara and Ben have to leave the shelter of their respective megacorp behind and become independent.

CS:  Are we mostly seeing the situation from the perspective of the protagonists?  Do we get a glimpse of how ‘the bad guys’ view the galaxy and their relationship with ‘the good guys’?  Do they get to make their case or does the storytelling make certain fundamental assumptions against them?

JB:  It’s mostly from the point of view of the protagonists, but the antagonists do get some point-of-view time. There are three antagonists in the first book. One of them is in it for himself, one is doing everything he can to advance his megacorporation, and the third is the colony leader who does the wrong thing for all the right reasons. He’s ideologically opposed to implantation technology, so he’s having a nightmare time when he has to spend a year in close quarters with psi-techs. He’s not evil, but he makes some terrible decisions, with tragic consequences.

CS:  Is the series finished or will there be sequels and prequels and spinoffs?

JB:  The trilogy is certainly finished, but I never say never again. Cara and Ben aren’t ever going to be able to retire and have an easy life without needing to be problem solvers. I cut loose a couple of favourite characters towards the end of Nimbus and I keep wondering what’s happening to them. I also have a couple of back-burner books that are set on one of the colonies a thousand years in the future when they’ve lost touch with their origins.

CS:  When will we be able to read Rowankind?

JB:  Rowankind looks as though it might be published in late 2018, though there’s still a bit of wibble-room on the timing. I’m still writing the first draft.

CS:  Bring us up to speed on that trilogy.

JB:  Winterwood and Silverwolf are out already. The trilogy is set in 1800 to 1803 in a Britain with magic. Mad King George is on the throne and Napoleon is hammering on the door. The industrial revolution is underway, but not with magic. There’s a race of biddable bonded servants, the rowankind, who have been around for such a long time that everyone’s forgotten their origins. The Mysterium will hang any unlicenced witch they can catch. In the first book, Winterwood, Ross Tremayne is an unlicenced witch who captains her own privateer vessel, dressed as a man. She’s accompanied by a crew of barely-reformed pirates, and the jealous ghost of her dead husband. She makes a deathbed visit to her estranged mother and gets a quest she doesn’t want and a half-brother she didn’t know she had. There’s some lovely rivalry between Ross’ late husband and her new romantic interest, Corwen. In the second book, Silverwolf, we’re dealing with the repercussions from Ross’ success at the end of Winterwood. The rowankind have magic and the Mysterium is beginning to wake up to that fact. We’re also dropped into the middle of Corwen’s family problems which intersect with things going on in the industrial revolution. Ah, I’m trying not to give away too many spoilers here. Let’s say that life is not getting easier for Ross and Corwen. The third book, which I’m writing now, is about Ross and Corwen finding a solution for persecuted magic users.

CS:  Will Rowankind have a different setting than the two previous books?

JB:  No. It carries on from Silverwolf, although the action moves back to London for part of the book. The story setting ranges from the West Country (Devon Cornwall and Somerset) to Yorkshire via London and, as in the other books, they’ll also be at sea on Ross’ ship, the Heart of Oak, visiting some of the pirate islands.

CS:  Will it have different characters?

JB:  It will still be Ross and Corwen taking the lead. It’s all in Ross’ first person viewpoint, so we don’t get to see anything she doesn’t experience. Corwen’s brother Freddie is still causing problems and Ross has promised to try and find out what happened to Olivia’s dad (henry Purdy) after the Mysterium conscripted him into the army. Also, a pirate character I really liked in the first book, Gentleman James Mayo, will turn up again. And we’ll finally get to meet Mad King George, who is mad for a specifically magical reason. Of course, Walsingham is still causing trouble. We never discovered what happened to his notebook—the one with all his dark spells in it.

CS:  What’s at stake for the protagonist and antagonists, in the story arc and in final novel?

JB:  Unless Ross and Corwen can protect the rowankind from the Mysterium the Fae have vowed to intervene, and that’s not going to be good for the country. They could simply decide to wipe out the troublesome humans if they want to. Our heroes need to change the hearts and minds of those in power. And speaking of the Fae, Ross’ brother, David, is having betrothal problems. He’s being pushed towards a marital alliance with Fae nobility, when he really only wants his childhood sweetheart, Annie. Meanwhile, Walsingham is trying to find his notebook before Ross does, and there’s a little matter of revenge for all that’s happened to him. Ross is still growing into her magic and there will be a few discoveries in that direction, too.

CS:  Again, will we see more stories in this universe?

JB:  Rowankind will bring this trilogy to a close, but I keep wondering what Ross and Corwen’s offspring might be like. Shapeshifters? Witches? Both? I like writing in this universe, and – hey – I’ve done a lot of research and it would be a shame to waste it. However, after Rowankind I have another historical fantasy book in preparation – a stand-alone this time – called The Amber Crown. It’s set in an analogue of the Baltic States in the early 1600s, and it’s a political fantasy with magic which brings together three very unlikely protagonists: a failed bodyguard, an assassin and a Romany witch.