Acclaimed actor Alan Rickman, one of fandom’s favorites, died of cancer January 14 at the age of 69.

His first few roles in major Hollywood films brought him to the attention of international audiences but certainly did not make him beloved — terrorist Hans Gruber in the Bruce Willis vehicle Die Hard (1988), the Aborigine murdering Elliot Marston (who also tries to have Tom Selleck’s title character killed) in Quigley Down Under (1990), or the Sheriff of Nottingham playing opposite Kevin Costner’s title character in Robin Hood: Prince of Thieves.

Allowed to escape the dark side at last, he played the sensitive and caring — and to some irresistible! — love interest Colonel Brandon in Sense and Sensibility (1995).

He brought his considerable skills to a quite different character, Alexander Dane, in Hugo-winning Galaxy Quest (1999). And while no one would prefer to see anyone else cast as Severus Snape in the Harry Potter films, I felt they never gave him enough to do until the very last one.

Rickman also voiced Marvin the Paranoid Android in the movie version of The Hitchhiker’s Guide To The Galaxy (2005), and the Blue Caterpillar in Alice in Wonderland (2010) and Alice Through The Looking Glass (coming in 2016).

J. K. Rowling marked his passing with this tweet —

There are no words to express how shocked and devastated I am to hear of Alan Rickman's death. He was a magnificent actor & a wonderful man.

Daniel Radcliffe posted an appreciation on his Google+ page. 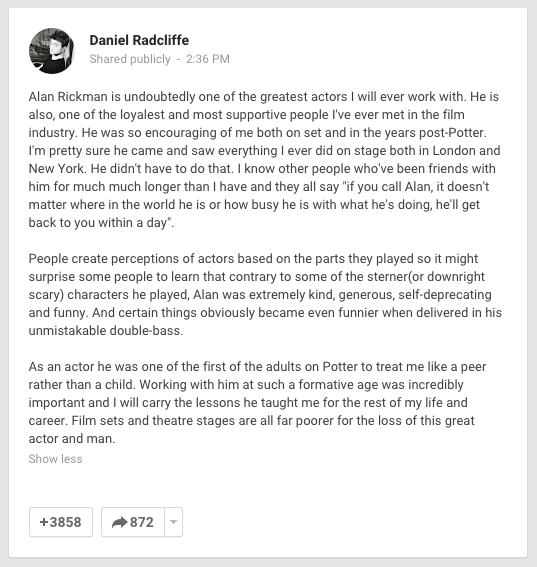 Beyond a career which the world is indebted to, he was a constant agent for helping others. Whether to institutions like RADA or to individuals and certainly to me, his advice was always spot-on. He put liberal philanthropy at the heart of his life. He and Rima Horton (50 years together) were always top of my dream-list dinner guests. Alan would by turns be hilarious and indignant and gossipy and generous. All this delivered sotto, in that convoluted voice, as distinctive as Edith Evans, John Gielgud, Paul Scofield, Alec Guinness, Alastair Sim or Bowie, company beyond compare.

When he played Rasputin, I was the Tzar Nicholas. Filming had started before I arrived in St Petersburg. Precisely as I walked into the hotel-room, the phone rang. Alan, to say welcome, hope the flight was tolerable and would I like to join him and Greta Scacchi and others in the restaurant in 30 minutes? Alan, the concerned leading man. On that film, he discovered that the local Russian crew was getting an even worse lunch than the rest of us. So he successfully protested. On my first day before the camera, he didn’t like the patronising, bullying tone of a note which the director gave me. Alan, seeing I was a little crestfallen, delivered a quiet, concise resumé of my career and loudly demanded that the director up his game.

Behind his starry insouciance and careless elegance, behind that mournful face, which was just as beautiful when wracked with mirth, there was a super-active spirit, questing and achieving, a super-hero, unassuming but deadly effective.