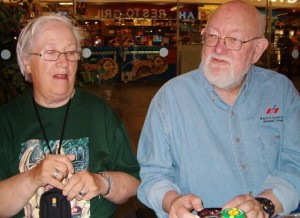 Alicia and Robin Johnson at Anticipation (2009). Photo by Rich Lynch.

Robin Johnson has lost his wife of over 20 years:

Alicia died in her sleep yesterday in the palliative care Whittle Ward here in Hobart. The cancer that must have been spreading for some time, unknown to everyone because she had no pain, was only diagnosed at the end of last year, My sister Sara, herself a survivor of a much more painful version, came from England to stay last month and has been a tower of strength. We also had a lot of help from carers and helpers provided at no cost by the Health department. Ten days ago her condition had deteriorated to the point where she needed to be in hospital, and she was carefully carried downstairs from her own bedroom and taken by ambulance to the hospital, where she had a lovely room with a balcony, terrific care, and was able to be visited by family and friends (and dog!). She had started feeling pain, and had all the medication she needed for that, which made her rather sleepy. She was lucid and connected most of Thursday, (we discussed the merits of a Sherlock Holmes production on television), but only had brief lucid intervals after that. She was sleeping when I left to go home on Sunday evening, and never awoke.

There will be a funeral service at the Wellington Chapel, Cornelian Bay, at 2:00pm on Thursday March 15th. Friends and family are welcome afterwards at 102 Salamanca Place. http://maps.google.com.au/maps?q=google%20map%20hobart%20tasmania&um=1&ie=UTF-8&hl=en&sa=N&tab=wl

4 thoughts on “Alicia Johnson Passes Away”