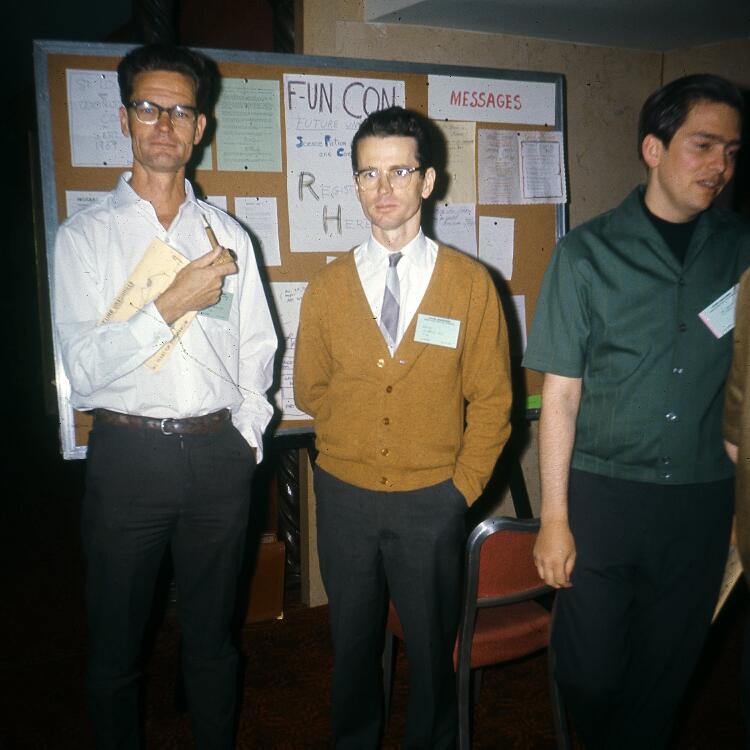 Arthur Jean Cox, center. His brother Bill is on the left, and Earl Thompson on the right. Taken at FUNcon I in 1968.

The death of long-time LASFSian and author Arthur Jean Cox was announced at the club’s October 6 meeting. No details were given.

He never missed a LASFS meeting from May 1945 to January 1952. He served seven terms as secretary and one term as Director. He contributed to the club genzine Shangri L’Affaires, as well as other zines including Science Fiction Times, Riverside Quarterly, and Science Fiction Review.

His first published story, “Twilight Planet,” appeared in F&SF in 1951. LASFS voted him a Fanquet (then a traditional dinner celebrating a club member’s first sale) and named him LASFS Writer of the Year in 1952.

Cox was a contemporary of Scientology founder L. Ron Hubbard, and late in life gave a video interview about such memories as the night in 1950 when he and A.E. Van Vogt were present at the Shrine Auditorium to see Hubbard present the woman he said was the world’s first Clear.