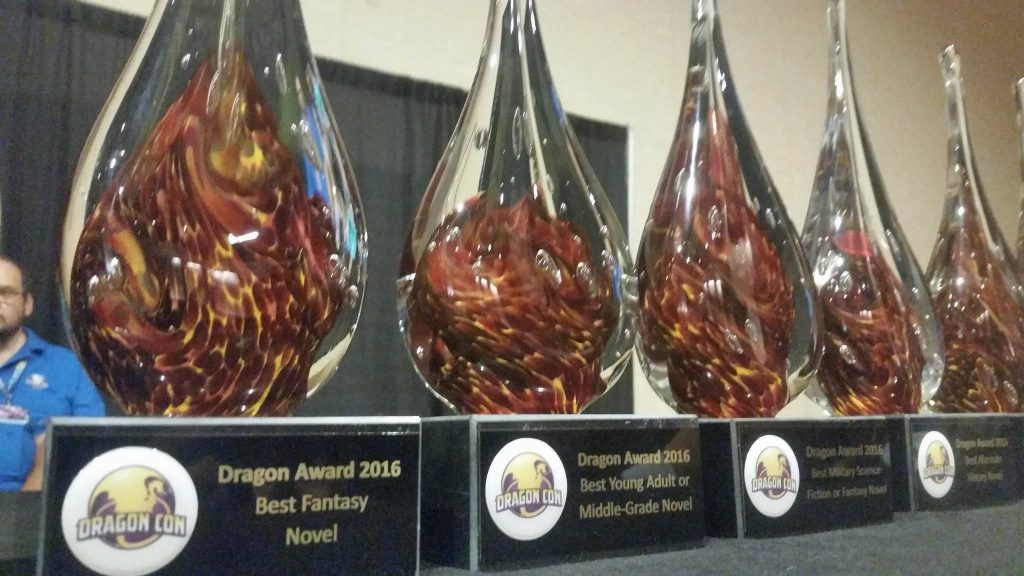 An Amicus Brief for The Dragon Awards

To the Dragon Con Committee,

I am willing to bet that this year’s Dragon Awards ceremony was barely over before the fannish naysayers and provocateurs began to bray that the Dragon Awards went to dismal writers and creators, and thank maker our own awards aren’t tainted like theirs…

What a load of BS.

Well, I want to assure all of you that I do not hold the same opinion as that rabble; I am here to offer some advice, not to slay the Dragon Awards.

And believe me, I KNOW how hard it must have been for your committee to start a set of awards from scratch; selecting categories, setting up a voting system and eligibility rules.

Since 1998, I have been at the forefront of nearly all of the changes to the Hugo Awards categories. I urged the splitting of the Best Dramatic Presentation and Best Editor categories, helped established of the Best Graphic Story category, co-sponsored the Best Fancast category and, over various and numerous objections of the more conservative elements in fandom, spearheaded the effort to recognize Young Adult books in the Hugo Awards ceremony starting next year.

I’m not reeling off these accomplishments as just braggadocio; I just want you to understand that I’ve gone through years of email exchanges, online taunts, face to face arguments, compromises and interminable hours of parliamentary procedures, pointless points, haggling and compromise at numerous Worldcon Business Meetings in order to keep the Hugo Awards fair, honest and relevant.

I admit that even though I have never attended Dragon Con, your convention has several enviable attributes over the Worldcon that I (and others I’m sure) have admired from afar.

You are based in a populous, major metropolitan area. You are not burdened by moving Dragon Con from year to year and your committee is a stable, fixed entity. And most importantly, you have the flexibility to change the structure of your awards on a dime from year to year as needed.  As you may have noted, it took the World Science Fiction Convention’s Business Meeting cabal SEVERAL YEARS of contentious debate before they could effectively block various miscreants from interfering with or gaming the Hugo Awards.

My own personal obsession about awards started when I began watching the Emmys and Academy Awards broadcasts of the late 1960’s and early 70’s. My earliest and most vivid memory was watching the 1972 Oscar show as Liza Minnelli presented Gene Hackman with his Best Actor award and the simple, halting and eloquent speech he gave afterwards.

As the decades have gone by, my interest in the process has deepened; it’s easy to follow most movie, tv and literature award shows and ceremonies, either being streamed or online. I cheer when someone I know or like wins and commiserate when they lose.

(Note to self: Ann Dowd, who won a Best Supporting Actress Emmy Award for The Handmaid’s Tale is a fine actress but there’s no way in hell she was better than Millie Bobby Brown was in Stranger Things. You’ll get over this. Eventually. Just Sayin’… )

Since Dragon Award nomination period is opening up later in next month, I want to offer you the following recommendations:

I have a confession to make: I really dislike the Australian ballot system that the World Science Fiction Convention has been using since the mid 1970’s. (For those of you who are unfamiliar with the Australian ballot process, you can see a simplified explanation of how it works here: http://www.chickennation.com/2013/08/18/you-cant-waste-your-vote/)

The Hugo Award voters (and administrators) seem to prefer to rank their preferences but frankly, going through the tabulations and rows of figures every year make my eyes roll around in my skull like a pair of out of control dice. In fact, I try to vote for one nominee on my Hugo ballot if I find a single story or work deserves the honor.

I must say that it is quite refreshing to sit down and actually make a single choice on the Dragon Award ballot for a change. (And yes, I did participate in the voting this year.) The only thing I do regret is that the eligibility period, which runs from July 1st  to June 30th of this year, meant that I had to choose between Arrival, Logan, Rogue One and Wonder Woman for Best SF film on this year’s ballot. But since Arrival had already won the Hugo for Best Dramatic Presentation this year, I was happy to acknowledge Wonder Woman with a vote (and a win) this year. This brings me to my next point:

I don’t know what criteria your award administrators use to finalize the number of nominees on the final ballot, but if Dragon Con is going to continue with the single vote system for the foreseeable future, I recommend that they be named on at least five percent of the nominating ballots. The World Science Fiction Society Constitution had a rule until recently:

No nominee shall appear on the final Award ballot if it received fewer nominations than five percent (5%) of the number of ballots listing one or more nominations in that category, except that the first three eligible nominees, including any ties, shall always be listed.

(This was taken directly from a previous version of the World Science Fiction Convention Constitution.)

Please note that this would allow for the same number nominees IF they meet the five percent rule. The rule also insures that you are putting the most popular things on the ballot and will also give you an indication that a category is not working out well enough to continue on the ballot. If you’re doing this already, great! Also, you might want to list NO AWARD on your ballots as an option for voters.

Spread the wealth; with dozens of film and television projects coming out annually, I think you can afford to be more generous in with these categories. I am quite certain that the voters would appreciate it as well. Another major plea; PLEASE list the writer of the film or television episode with each nomination. This is a personal pet peeve of mine; I don’t buy the auteur theory (that the director is the ‘true author” of a work) so unless the director was also the author of the work, it’s just common courtesy to list writers, too. After all, this stuff doesn’t write itself, you know.

I applaud the number of awards for the creators of comics but I am quite sure that you realize that artists who render book covers, art books and other illustrations and  are a BIG part of the sf and fantasy community. Establishing an award for a body of yearly work would be quite a nice gesture towards them.

This is a versatile award that can truly express the appreciation of the committee, and by extension, fandom itself, than a special or lifetime achievement award to some of the more notable members of the fantasy and sf community. Also, it might be fun to include the attendees in on the selection as well.

Once upon a time, I thought it might be a great idea for the Hugo Awards to have voting open to the public OR voting with a small fee that was lower than obtaining a supporting membership. I think that the slating efforts of both set of Puppies have put an end to that sort of utopian thinking. Thus, bringing me to my last point:

Publishing and the nomination and voting results annually and publicly naming a rotating set of administrators would be immensely helpful to Dragon Awards. Starting an award is hard work. Establishing and maintaining high standards of a new award in the modern information age is even harder.

In any event, I wish you all the best of luck with the Dragon Awards and with Dragon Con.

Cheers (or Seinfeld),
Chris B.