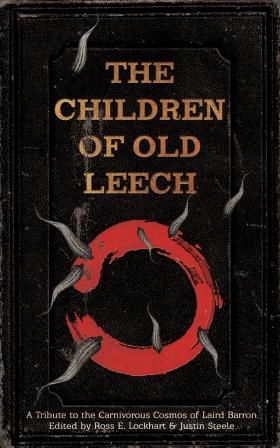 Many of the brightest lights in dark fiction to pay homage to one of horror’s masters in The Children of Old Leech: A Tribute to the Carnivorous Cosmos of Laird Barron from WordHorde, edited by Ross E. Lockhart and Justin Steele.

Laird Barron is a three-time winner of the Shirley Jackson Award. Earlier this year he won a Bram Stoker Award for Superior Achievement in Fiction Collection with The Beautiful Thing That Awaits Us All and Other Stories.

Barron’s fiction has long been an inspiration to his peers. The interwoven stories and novels create a rich tapestry of noir-infused cosmic horror. This mythology makes for an excellent backdrop for the weird tales within.

On July 15, Word Horde will commemorate the book’s official release with a virtual toast to Old Leech himself via social media, where all are encouraged to share their thoughts about the anthology and its inspiration, Laird Barron, using the hashtag #TCoOL.