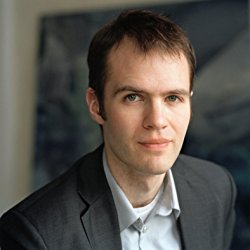 By Carl Slaughter: Ruin of Angels, the sixth novel in the Craft Sequence series, by Tor author and Campbell winner Max Gladstone, is scheduled for September 2.

The collected Bookburners series, created by Gladstone and co-written with Mur Lafferty among others, came out in January 2017.

The collected The Witch Who Came in from the Cold, co-created by Gladstone and co-written by Michael Swanwick among others, will be out in June 2017. 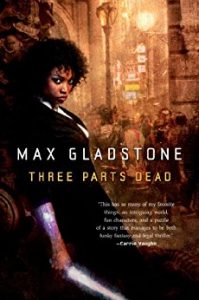 A god has died, and it’s up to Tara, first-year associate in the international necromantic firm of Kelethres, Albrecht, and Ao, to bring Him back to life before His city falls apart.

Her client is Kos, recently deceased fire god of the city of Alt Coulumb. Without Him, the metropolis’s steam generators will shut down, its trains will cease running, and its four million citizens will riot.

Tara’s job: resurrect Kos before chaos sets in. Her only help: Abelard, a chain-smoking priest of the dead god, who’s having an understandable crisis of faith.

When Tara and Abelard discover that Kos was murdered, they have to make a case in Alt Coulumb’s courts — and their quest for the truth endangers their partnership, their lives, and Alt Coulumb’s slim hope of survival.

Set in a phenomenally built world in which lawyers ride lightning bolts, souls are currency, and cities are powered by the remains of fallen gods, Max Gladstone’s Craft Sequence introduces readers to a modern fantasy landscape and an epic struggle to build a just society. 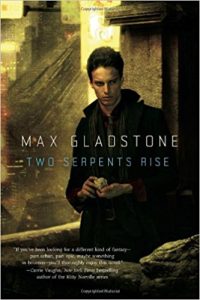 In Two Serpents Rise by Max Gladstone, shadow demons plague the city reservoir, and Red King Consolidated has sent in Caleb Altemoc?casual gambler and professional risk manager?to cleanse the water for the sixteen million people of Dresediel Lex. At the scene of the crime, Caleb finds an alluring and clever cliff runner, Crazy Mal, who easily outpaces him.

But Caleb has more than the demon infestation, Mal, or job security to worry about when he discovers that his father?the last priest of the old gods and leader of the True Quechal terrorists?has broken into his home and is wanted in connection to the attacks on the water supply.

From the beginning, Caleb and Mal are bound by lust, Craft, and chance, as both play a dangerous game where gods and people are pawns. They sleep on water, they dance in fire…and all the while the Twin Serpents slumbering beneath the earth are stirring, and they are hungry. 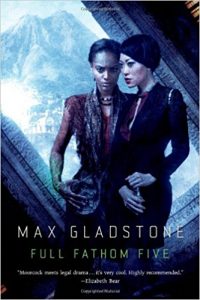 On the island of Kavekana, Kai builds gods to order, then hands them to others to maintain. Her creations aren’t conscious and lack their own wills and voices, but they accept sacrifices, and protect their worshippers from other gods?perfect vehicles for Craftsmen and Craftswomen operating in the divinely controlled Old World.

When Kai sees one of her creations dying and tries to save her, she’s grievously injured?then sidelined from the business entirely, her near-suicidal rescue attempt offered up as proof of her instability.

But when Kai gets tired of hearing her boss, her coworkers, and her ex-boyfriend call her crazy, and starts digging into the reasons her creations die, she uncovers a conspiracy of silence and fear?which will crush her, if Kai can’t stop it first. 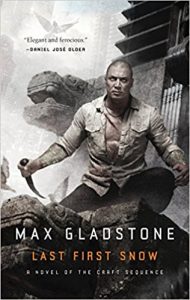 Forty years after the God Wars, Dresediel Lex bears the scars of liberation-especially in the Skittersill, a poor district still bound by the fallen gods’ decaying edicts. As long as the gods’ wards last, they strangle development; when they fail, demons will be loosed upon the city. The King in Red hires Elayne Kevarian of the Craft firm Kelethres, Albrecht, and Ao to fix the wards, but the Skittersill’s people have their own ideas. A protest rises against Elayne’s work, led by Temoc, a warrior-priest turned community organizer who wants to build a peaceful future for his city, his wife, and his young son.

As Elayne drags Temoc and the King in Red to the bargaining table, old wounds reopen, old gods stir in their graves, civil blood breaks to new mutiny, and profiteers circle in the desert sky. Elayne and Temoc must fight conspiracy, dark magic, and their own demons to save the peace-or failing that, to save as many people as they can. 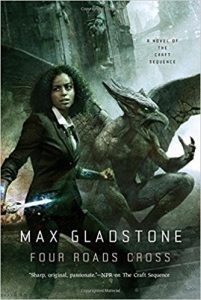 The great city of Alt Coulumb is in crisis. The moon goddess Seril, long thought dead, is back–and the people of Alt Coulumb aren’t happy. Protests rock the city, and Kos Everburning’s creditors attempt a hostile takeover of the fire god’s church. Tara Abernathy, the god’s in-house Craftswoman, must defend the church against the world’s fiercest necromantic firm–and against her old classmate, a rising star in the Craftwork world.

As if that weren’t enough, Cat and Raz, supporting characters from Three Parts Dead, are back too, fighting monster pirates; skeleton kings drink frozen cocktails, defying several principles of anatomy; jails, hospitals, and temples are broken into and out of; choirs of flame sing over Alt Coulumb; demons pose significant problems; a farmers’ market proves more important to world affairs than seems likely; doctors of theology strike back; Monk-Technician Abelard performs several miracles; The Rats! play Walsh’s Place; and dragons give almost-helpful counsel. 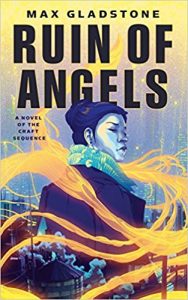 The God Wars destroyed the city of Alikand. Now, a century and a half and a great many construction contracts later, Agdel Lex rises in its place. Dead deities litter the surrounding desert, streets shift when people aren’t looking, a squidlike tower dominates the skyline, and the foreign Iskari Rectification Authority keeps strict order in this once-independent city?while treasure seekers, criminals, combat librarians, nightmare artists, angels, demons, dispossessed knights, grad students, and other fools gather in its ever-changing alleys, hungry for the next big score.

Priestess/investment banker Kai Pohala (last seen in Full Fathom Five) hits town to corner Agdel Lex’s burgeoning nightmare startup scene, and to visit her estranged sister Lei. But Kai finds Lei desperate at the center of a shadowy, and rapidly unravelling, business deal. When Lei ends up on the run, wanted for a crime she most definitely committed, Kai races to track her sister down before the Authority finds her first.

But Lei has her own plans, involving her ex-girlfriend, a daring heist into the god-haunted desert, and, perhaps, freedom for an occupied city. Because Alikand might not be completely dead?and some people want to finish the job. 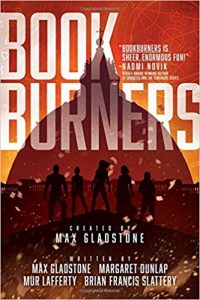 The critically acclaimed urban fantasy about a secret team of agents that hunts down dangerous books containing deadly magic—previously released serially online by Serial Box, now available in print for the first time!

Magic is real, and hungry. It’s trapped in ancient texts and artifacts, and only a few who discover it survive to fight back. Detective Sal Brooks is a survivor. She joins a Vatican-backed black-ops anti-magic squad—Team Three of the Societas Librorum Occultorum—and together they stand between humanity and the magical apocalypse. Some call them the Bookburners. They don’t like the label.

Supernatural meets The Da Vinci Code in a fast-paced, kickass character driven novel chock-full of magic, mystery, and mayhem, written collaboratively by a team of some of the best writers working in fantasy.

THE WITCH WHO CAME IN FROM THE COLD 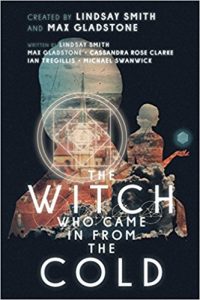 The Cold War rages in back rooms and dark alleys of 1970s Prague as spies and sorcerers battle for home and country. The fate of the East and the West hangs in the balance right along the Iron Curtain—and crackling beneath the surface is a vein of magic that is waiting to be tapped.