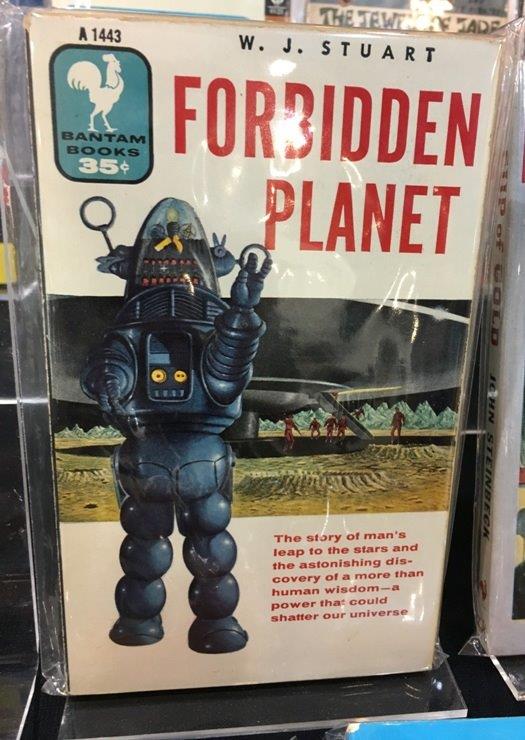 By John King Tarpinian: We spent the better part of the day at the Pasadena Antiquarian Book, Print, Photo and Paper Fair, aka The Bustamante Show. I was with friends who are mainly paperback collectors.  When I say collectors and it is a lowball guess that between the two of them they have a quarter of a million paperbacks between them.  There are friends or associates in attendance who also attend our Los Angeles Vintage Paperback Show, March 19, 2017.  There were discussions galore about next year’s new California COA law.

I have given Mike bazillions of photos of books that should be of interest to File 770 readers.  The seven-volume set of C.S. Lewis was a bargain at $600…if I’d have offered $500 I probably could have walked home with them.  There were a number of my friends I could have given Flying Saucers and Scripture to.

This was the first time I had seen the movie tie-in paperback edition of Forbidden Planet.  If I still had free wall space I’d have bought two photos of Bela Lugosi and Boris Karloff, brought them home….and then suffered the wrath of She-Who-Must-Be-Obeyed.  The Left Hand of Darkness also beckoned to me, at only $175, signed.

It always makes one feel good when books one bought for a small sum have dealers asking large sums for them.  I’ve already told my 26-year-old-baby-girl that she will be able to buy herself a nice home when she sells my 300-plus signed Bradbury editions when I am six feet under.

Now it is time to put my feet up and read Bubba Ho-Tep.