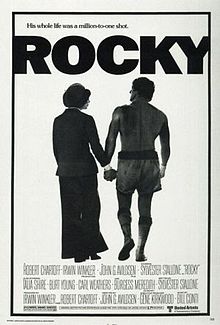 Rocky doesn’t end with a knockout, but its ending is a knockout – thanks to Ray Bradbury. Sound unlikely? Film editor Richard Halsey says it’s true.

Few can forget Rocky’s emotional ending and Halsey recalls that a step toward that classic scene occurred at a screening held for United Artists executives. “We had an ending where Rocky walks off through a turnstile with Adrian, and we had this folk tune about Rocky. It was bad,” says Halsey. “I remember the writer, Ray Bradbury, saying, ‘Just get rid of that song and that walking down the turnstile, and you have got a hell of a picture.’

“So [director John Avildsen], the producers, Scott Conrad, and I looked at the movie in the cutting room and we constructed a new ending in the ring. And we did the pick-up shots with Adrian listening to the fight backstage, and then she and Paulie coming into the ring.”

While focusing on Bradbury’s fiction, people can forget he also had a lucrative career as a script doctor.

And although they changed Rocky’s ending, I wonder if the image used in the theatrical poster comes from the original concept?

1 thought on “Bradbury Advised On Rocky”