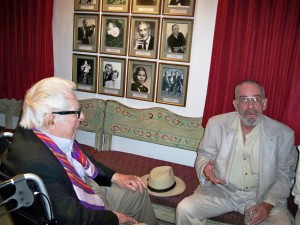 By John King Tarpinian: “Santa Barbara hosted the National Endowments for the Arts Big Read program, during Banned Books Week. Ray Bradbury’s Fahrenheit 451 was their book of choice. Ray was introduced by Thomas Steinbeck, son of John, to the capacity crowd. While we were in the green room Thomas Steinbeck told a story that brought tears to my eyes. For Halloween his father would read Something Wicked This Way Comes to him and his brother John, Jr. Think about that, John Steinbeck reading a story by Ray Bradbury to his boys. How cool is that?”

1 thought on “Bradbury at Big Read”