By Brandon Engel: When the name John Carpenter comes up, people tend to think more about his involvement with movies like Halloween (1978), The Thing (1982) or Escape from New York (1981). These thrillers helped to shape the horror and sci-fi aesthetic of the late 1970’s and early 1980’s. However, with the film Starman (1984), Carpenter broke with his standard themes and made a movie that looked at science fiction in a new way, and proved to detractors that, as a filmmaker, he wasn’t purely reliant upon sensational themes (Halloween) or over-the-top special effects (The Thing).

The movie depicts an alien from an unknown planet who has decided to visit earth after hearing an invitation that was transmitted via Voyager 2 — an invitation for all other lifeforms to connect with earthlings. The alien soon discovers that earth is a hostile place. He ends up getting shot down in a remote location in Wisconsin. As with many movies of the time, the US government had been tracking the skies with typical Cold-War era paranoia. After exiting its craft, the alien proceeds to a nearby home to find the first body it can inhabit on this world. The government, meanwhile, calls in experts from SETI, police departments and the military to conduct an extensive search for the entity from the crash. 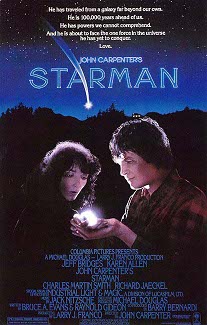 Back in the Wisconsin home, a woman, Jenny Hayden (Karen Allen), has been reminiscing about her late husband, Scott (Jeff Bridges). The protagonist first appears as an ominous ball of light floating through the air. The alien finds a lock of Scott’s hair and replicates the DNA to recreate the body and inhabit it. This sequence still features some of the well-known tropes of the science-fiction genre. The ball of light floats through the air in a supernatural way, accompanied by background music that seems to forebode something scary and possibly horrific right on the horizon.

Upon replicating the DNA from the hair, the alien undergoes a gruesome transformation from a fetus to a fully developed man. The special effects seem somewhat dated now, but still have some impact. Carpenter also makes use of an abstract sci-fi montage to show what is happening on the cellular level during this transformation. After this point, though, the movie heads in a completely different direction, focusing more on the interaction between the widow and her deceased husband’s alien doppelganger.

The alien manages to communicate and to manipulate his new human form enough to tell Jenny that he needs to get to Arizona to return to his home planet. He is now an exact clone of the man on the home videos that she was watching just moments before. Most of the rest of the movie deals with how she handles the uncanniness of the situation, and the sudden appearance of this entity who is physically identical to her husband but knows nothing about life on Earth. Part of what’s notable about the film is that it plays like a romantic road film, peppered with elements of classic science-fiction.

The studio had originally envisioned Starman as a vehicle for special-effects. Carpenter wanted to downplay the significance of the effects, and focus instead on the interaction between the two main characters. John Carpenter might have learned his lesson from The Thing, which was a superb science-fiction film that failed to gain any sort of box-office draw from outside the built-in science-fiction fanbase. And where the The Thing failed in terms of box-office receipts, Starman went on to sell well for the home viewing market, and it’s still shown frequently on niche television networks (more details), and it has actually aged quite well.

Through this process of travelling and encountering humans in different situations, the alien makes some incisive comments on how people act. Many of these moments are comedic and existential, such as when he learns what people do in the bathroom. Also, through the way he treats the people and animals he meets, he changes how Jenny thinks about the life and death of her husband.

The starman also highlights other human frailties like smoking, and discrimination against people who are different. His story also symbolizes the tension between science and the military, as well as the fear of government overreach near the end of the Cold War — a major theme of 1980’s movies that Carpenter blended into this sci-fi movie with an emotional touch. What’s more, it integrates some of the sensibility of science-fiction films from the 1950’s (the height of the Cold War) such as The Day the Earth Stood Still (1951), wherein humanity is in a state of pandemonium over the presence of an outsider — and all the aliens want to tell us is to relax.