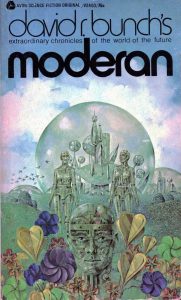 New York Review of Books Classics has acquired World rights to David R. Bunch’s out-of-print collection Moderan, for publication in 2017. The deal was made by Jeff VanderMeer through VanderMeer Creative, acting on behalf of the Bunch estate, and the acquiring editor is Sara Kramer. Bunch’s highly original Moderan stories were prized by such iconic editors as Judith Merril, Harlan Ellison, and Cele Goldsmith. The stories were sometimes controversial with readers and published in both genre and literary magazines from the 1950s through 1970s.

Jeff VanderMeer says of these stories —

In the Moderan universe, half-organic cybernetic human beings try to survive in a dystopian future in which the Earth has been mostly mined out and asphalted over. These hard-edged yet lyrical stories—as if Philip K. Dick had collaborated with e.e. cummings—are more topical today than when written in what they have to say about our relationship to the environment and each other. 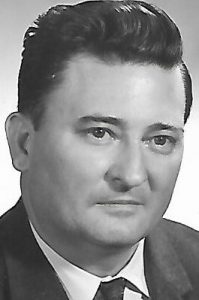 “I’m very happy that my father’s legacy will live on with a new generation of readers and with such a prestigious publishing house,” said Phyllis Deckert, Bunch’s daughter. “We hope it signals a resurgence of interest in my father’s work in general.”

“It’s rare that a writer comes recommended to you as ‘singular,’ ‘mind-blowing,’ a ‘neglected master’ and lives up to the hype,” said editor Sara Kramer. “But that’s just what happened in the case of David R. Bunch. Suffice to say we at NYRB Classics are pretty excited to have a part in introducing him and his Moderan stories to the wider world.”

[Thanks to Jeff VanderMeer for the story.]

8 thoughts on “Bunch’s Moderan Collection to be Reprinted”