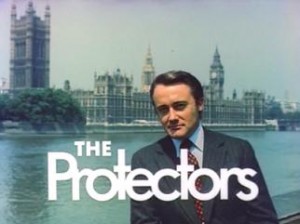 By James H. Burns: Seeing U.N.C.L.E. mentioned at File 770 today reminded me of a great story Robert Vaughn once told to me and which, oddly, is not in his autobiography!

We were at a tribute to Vaughn at the Players Club in Manhattan, and were chatting amiably afterwards:

Vaughn was I think I bit surprised and happy that there was someone to talk with who knew a bit about various aspects of his career… (Plus, I had just explained the ending of Bullitt  to him, something which had apparently eluded the both of us, for years!)

We had just met, but suddenly there were a wealth of neat tales, as we stood near the passage to the actor club’s great hall…

In the early ’70s. Vaughn had signed to star in The Protectors, a syndicated, half-hour action adventure series about international detectives, from ITC and producers Gerry and Sylvia Anderson. The Andersons, of course, are well known to TV buffs and science fiction fans of a certain age for Supercar, Fireball XL5, Thunderbirds and Captain Scarlet — all marionette shows, and the live-action series UFO, and Space: 1999.

(Intriguingly, in a move probably unknown to him, William Shatner was a finalist to be offered The Protectors‘ lead, which may have serious altered the trajectory of his career, starring in a major internationally distributed TV show, as a CONTEMPORARY “man-of-action.”)

The Andersons’ puppet shows were always a much greater success in Europe than in the United States, and UFO (filmed a couple of years earlier), had yet to be seen here.

The Protectors was a big deal for Anderson, his first major (and, as it turned out, last) mainstream–non-fantasy–endeavor.

The Andersons invited Vaughn and his then business partner to their London home for dinner, for a celebratory meal.

Vaughn and his business manager/pal had drinks in the living room, and then Gerry and Sylvia led them into the formal dining room…

It was only this small group, but the huge table was set for MANY:

And seated at each gilded chair was one of the Andersons’ famous Supermarionation figures!

But Vaughn and company had NO IDEA about the marionette shows…

And for a moment were perhaps just a tad worried —

At what exactly they had gotten themselves into!