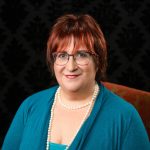 Barbara Barnett offers an articulate and insightful essay, illustrated with examples from classic literature and popular culture, about an enduring and enduring literary archetype.

Barnett’s novel The Apothecary’s Curse was published by Pyr this month.

By Barbara Barnett: Batman. Severus Snape. Han Solo. Aragorn. Jaime Lannister. Roland in Stephen King’s Dark Tower. Sherlock Holmes (in his many guises). What have they got in common with Emily Bronte’s Heathcliff in Wuthering Heights, Charlotte Bronte’s Mr. Rochester in Jane Eyre, and Notre Dame’s Hunchback in Hugo’s novel? Besides all being fictional male characters?

Each of these modern heroes (or anti-heroes) are, like their Victorian counterparts, descendants of a whole literature of nineteenth century literary heroes—melancholy, romantic anti-heroes who find roots in Lord Byron’s 1812 narrative poem Childe Harold’s Pilgrimage—they are Byronic heroes. So how’s a Byronic hero different than a hero-hero, you ask. Thanks for playing!

Byronic heroes are highly intelligent, cynical, moody. Some are anti-heroes, some aren’t. Some are complete villains! But all tend to brood and are often found struggling with their own integrity and with their pasts. They are among the darker literary heroes, but that’s not to say they can’t have a lot of good lurking beneath the surface. But that good is usually submerged, often deeply—only to be revealed under very specific circumstances.

Sometimes, especially when talking about movies or television and a character that’s been portrayed by several actors, the Byronic nature of the character is dependent on who’s playing him (and who’s writing him). So for Batman, think Christian Bale, not Adam West. The Hulk? Edward Norton or Mark Ruffalo, not Bill Bixby. For The Doctor (of Who fame), perhaps think David Tenant’s portrayal as the Tenth Doctor.

The Victorian poet Lord Byron’s lover Lady Caroline Lamb described the writer (and by extension, all “Byronic” heroes) as “mad, bad, and dangerous to know.” They are often heroes by default, possessing no overt “heroic” or even altruistic motive, drawing us in with their dark magnetism and charisma. (It’s why Robert Carlyle’s portrayal of both Nicholas Rush on Stargate Universe and his Rumplestiltskin on Once Upon a Time—for the first four seasons—completely hooked me.)

Byronic heroes come in many stripes: some of them are irredeemable, often meeting tragic ends, (John Milton’s Paradise Lost portrays Satan as a Byronic hero). Sometimes they are completely redeemable (think Han Solo), and then, often only by the love of a good woman (Princess Leia).

So, what makes a hero “Byronic?” Thanks for playing!

It’s at the root of their survival. Otherwise we might dismiss them (or they’d be in jail or dead). Maybe he’s hyper-observant with keen deductive reasoning skills and intuition, or the perceptiveness of a savant. Genius that keeps our Byronic hero one step ahead of everyone else: the bad guys—and good guys. Sometimes that genius makes them annoying to the mere intellectual mortals around them, but in the end, they’re thankful for the “mad skillz” that bring down the real villains.

Whether it’s through the sheer force of their intellectual power or something else, there is a larger-than-life vibe to all Byronic heroes. Despite their flaws, constant brooding and frustrating moodiness, they seem to draw people in by the sheer force of personality, always at the center of things, even when not interested in being there.

Maybe we readers or viewers perceive the wounded spirit that drives our hero’s less attractive attributes, and are driven by a natural desire to heal him. Woundedness is a classic literary device to humanize an anti-heroes. Even before we knew he was good, there was always something about Snape, right? Despite Dr. Rush’s frustrating self-serving drive, we knew (or at least I perceived) that something was behind it. He’d not always been that way. And lo and behold, we discover (not that far into Stargate Universe’s narrative) that Rush had, indeed, been a different man).

But it’s also the irrepressible energy when the “game’s afoot.” We want to follow Holmes when he’s on the hunt. Or Ironman. Or Batman. Or Captain Jack. The sheer force of personality makes these guys a natural leader, and we must follow—even when we can’t quite keep up with the thought process. One of my favorite quotes from the brilliant TV show House (OK, admittedly not exactly a genre show on its face, but absolutely a Sherlock Holmes.) comes in the second episode of season two. As he explains something to lesser physicians, they are hopelessly lost, finally catching up with him as he leads them to the point of a lengthy metaphor. “Welcome to the end of the thought process,” he says. Exactly.

In the same episode, we see how effortlessly House commands a large team of experienced physicians as he executes an experimental and dangerous diagnostic protocol on a young cancer patient with a blood clot in her brain. The procedure is so dangerous and intricate, it requires rehearsal to get it just right.

Commanding a large team of surgeons, anesthesiologists, cardiologists, and neurologists; nurses and technicians, he plays them like a symphony conductor. And they hang on his every word, trusting him for his knowledge, self-confidence and through the sheer force of his personality, captivated by the genius at work.

Troubled Past and Painful Present

Batman’s parents were murdered in front of him. Mr. Spock is the product of a interplanetary marriage, conflicted and pained by his emotional (human) side, which he tries (and occasionally fails) to suppress. The past of our Byronic heroes informs every part of their present: the cynicism, the aloofness, the jerk-ness, but also the wounded spirit, world-weariness and the vulnerability just lurking beyond our grasp.

Scratch a cynic’s veneer and you may discover an idealist. Although not every Byronic hero has an idealistic or romantic side, most do—sometimes so deeply buried beneath a lifetime of torment, it only emerges under the rarest of conditions. Once Upon a Time’s Rumplestiltskin is a hard man. He is tough and harsh. He was betrayed from the time he was a child by a cruel father and a dismissive wife who betrayed him. But there are moments when we get glimpses of the idealist, the kind man who pursued an idea to stop the ogre wars that led children to their deaths. The character suffered, however, when the creators of the series seemed to forget (or erase) Rumple’s nobler self.

Even Game of Thrones’ Jaime Lannister—a real villain at the beginning—has a noble heart buried quite deeply, shielded and toughened by his brutal, cruel father.

Lestat in Ann Rice’s Interview with a Vampire, Edward Cullen in Stephanie Meyer’s novel Twilight, Torchwood’s Captain Jack, Bruce Wayne, David Banner, Scott Summers… The list goes on. The genre’s Byronic heroes are almost always classic outsiders. There is something that sets them apart from everyone else. Maybe he’s a mutant, maybe he’s got a physical disability, maybe he’s a non-human living amongst humans. They are aliens of one sort or another. It’s their differentness that pushes them outside the circle, whether to become inward dwelling recluses or complete outlaws. But it makes them among the most adaptable of heroes.

As classic outsiders, Byronic heroes need unique, highly developed coping skills. They have to be cunning and adaptable to survive in a world that either dismisses or scorns them. Faced with adversity, perhaps a family that casts them out or a lover who proves faithless, they go off to war, they get an education, develop some sort of intellectual superpower. When they return, perhaps not triumphant, they are stronger for the experience.

There’s a line in the 2008 film The Dark Knight spoken by Bruce Wayne’s servant and protector, Alfred. “You’re the one who can be the outcast and do the things that no one else can… A watchful protector; a dark knight.” Wayne’s alter ego Batman is described as the necessary evil to combat the greater evil. It’s the outsider status that makes Batman possible.

Byronic heroes are, more than anything else, “mad, bad, and dangerous to know.” Yet we are drawn into their orbits, intent on knowing them beneath the cape, behind the mask, beyond the icy exterior. And they will forever live as an essential genre archetype. (At least I hope so!)