By John Hertz:  He has just the one name, pronounced “k’TINE”.  Not even “Mr. Ctein”. The United States grant no titles of nobility, nor knighthoods, so we need not speculate as to whether he might ever become Sir Ctein or Lord Ctein. Rules get exceptions, and I myself humbly acknowledge having now and then the favor of acquaintance with a baron, or even a duke, but in his case the possibility seems doubtful.

You may well know him.  He has long been part of our community, and has appeared here.

His widest renowned accomplishment may have been his mastering the subtle and difficult dye transfer photographic process.  It is unequalled in photochemistry.  He may have been the leader in the world.  Fortunately he as a photographer is also a superb technician.  He has exhibited at the World Science Fiction Convention.  Unfortunately the maker of essential dye-transfer ingredients ceased production.  Fortunately he was able to stockpile a supply.

In 2015 he and John Sandford published a science fiction novel, Saturn Run.  It was his first fiction and his co-author’s first science fiction.  This adventure too was extraordinary.  You can see my interview with Ctein here (PDF file, starts at p. 17).  I thought Saturn Run Hugo-worthy.  Ctein said “Naah.”  Anyway in 2017 its paperback followed.

Thereafter he began a collaboration with David Gerrold, who told us in February some of it would appear soon.  It has; “Bubble and Squeak” in the May-June Asimov’s.

It is not a comedy, despite the title and many puns – one, seeded at the start, comes to fruit so much later it may deserve comparing with Walt Kelly’s architecture of “Yes, Santa Claus, there is a Virginia”; another is so exquisite I may be forced to excuse reliance on a sadly unscholarly mispronunciation; another unfortunately prevents me from telling you it’s Sloane, solid Sloane.

The thrust of the story is a near-desperate adventure.  It’s hard.  It conforms (if I may use the word in connection with these authors) with Theodore Sturgeon’s “Science fiction is knowledge fiction” – another great pun, consider the Latin.  It has compassion and even a case of conscience.

It will gratify some readers and trouble others.  I spent half an hour with a friend discussing the ending. But these are deep waters, Watson. 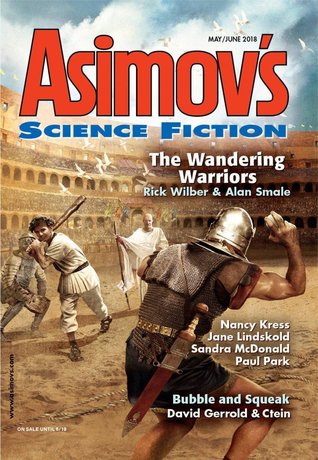 5 thoughts on “Ctein Plunges Ahead”