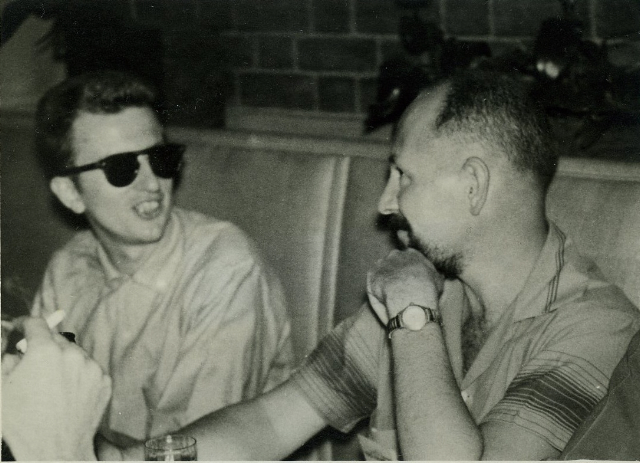 Dave Rike, who did his share to create the “wealth of fable” which inspired the title of Warner’s history of 1950s fandom, has passed away. A note from his son, Darius, in the latest newsletter of First Fandom reports Rike died November 1, 2014.

Dave co-edited the original issue of Innuendo with Terry Carr in 1956, a fanzine best remembered today for publishing the writing of “Carl Brandon”, a hoax who described himself as a fan of color but whose identity was created by several fanwriters to address issues of race within the science fiction community. Those who wrote under the name Carl Brandon included Carr, Bob Stewart, Ron Ellik, Pete Graham, Miriam Carr, Karen Anderson and Rike.

And after cartoonist Ray Nelson invented the iconic fan wearing a beanie, Rike was one of the fanartists who helped popularize the image, along with Bjo Trimble, Lee Hoffman and ATom. 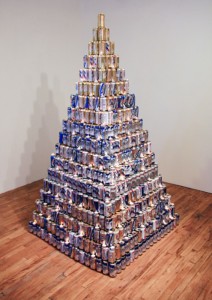 Dave also was among the Bay Area fans responsible for the mythic Bheer Can Tower to the Moon (with Terry Carr and Bob Stewart), whose history he retraced for Mimosa #15. The Tower legend cast a figurative shadow over fandom for decades, and many a fannish room party has piled up a Tower of its own. Two examples: The first I ever saw was at the 1978 Westercon. rich brown, Dr. Gafia, noted in his fannish lexicon another at a room party during the 1992 Worldcon. I’m positive the Tower was part of the reason Randy Bathurst sculpted a beanie-weaing bheer can cranking a mimeo for the original FAAn Awards.

Dave, a lifelong resident of the San Francisco Bay area, enjoyed reading and according to Darius, “lived his life surrounded by books.”

He was active in politics and his left-leaning views were sufficiently well-known that a writer for Science Fiction Five-Yearly knew readers would appreciate his ironic contrast about someone standing out “like Dave Rike at a meeting of the John Birch Society.” 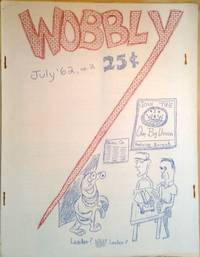 He lent his talents as a fanartist to promote the Industrial Workers of the World, creating the cover of Wobbly #2 (1962), illustrating what it would look like if an alien’s first contact on earth was with IWW members. The caption: “Leader? WHAT leader?”

That social conscience may be one reason Rike was on the distribution for Bill Donaho’s Great Breen Boondoggle or All Berkeley Fandom Is Plunged Into War (1963, which listed those being sent a copy).

Given his political activity, and bearing in mind the 1950s were the height of the Cold War, it is interesting that Dave was not deterred from applying for a position that required an investigation by Army Intelligence. Chaos spread throughout fandom as they did their background check, as Harry Warner Jr. explains in A Wealth of Fable:

They did such a thorough job on Rike that they visited a number of fans, some of whom knew Dave in only the most minimal fashion. One investigator was in a terrible tizzy over is inability to understand why so many fanzines which he inspected contained little or nothing about science fiction. Then he found a copy of Taurasi’s sercon Science Fiction Times, which seemed to quiet him. The membership rosters of The Cult and FAPA fell into the maw of the investigative machinery. This caused some individuals in those organizations to fear the most alarming sorts of consequences, none of which occurred.

Dave was a longtime subscriber to File 770. His mail was always identifiable because he liked to write notes in the margins of recycled subscription cards, and send them in the preaddressed envelopes that came with junk mail, his exaggerated large script in the white space making sure the postal service delivered it all to the right destination.

He was more than a witness to legendary times — he helped make the memories.